Video: Protesters in Confrontation with Black Man Right in Front of Confederate Flag 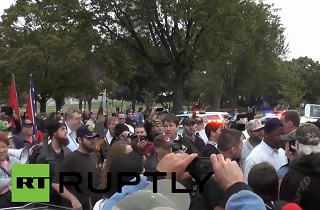 Sunday’s Million Veterans March in Washington, DC was marred by the flying of a Confederate flag at what became a very Tea Party-heavy event, but let anyone get the idea that Confederate Flag Guy just showed up to photobomb CNN, raw video from RT America’s Ruptly TV lays that notion to rest. Not only did Confederate Flag Guy stand comfortably with his fellow mostly-white protesters, he even had a birds-eye view when protesters did get into a confrontation… with one of the few black people in attendance who wasn’t a cop being screamed at and heckled for looking like “something out of Kenya.”

Conservatives desperate to distance themselves from the racist imagery on display at Sunday’s protest will suggest that Confederate Flag Guy is some wacky aberration, or maybe even a plant, but the real issue isn’t so much the one guy with the traitor’s flag, but the thousands around him who did not bat an eye. He wasn’t just at the White House, either, and in none of the many photos and videos is anyone backing away from the guy, let alone confronting him:

Lest you also think that these protesters were just not in the mood for confrontation, though, check out this video, at about the one-minute mark, and stay for the priceless 1:15 shot of a cop brushing the Confederate flag aside:

It’s not clear what that guy was upset about, maybe he had it coming, but was it worse than marching around with a traitorous, racist flag? That argument happened right in front of Confederate Flag Guy, and the crowd sure got worked up chasing the man’s car away.

Finally, lest you think Confederate Flag Guy was just keeping to himself with his giant banners, here’s some more of Ruptly’s raw video, which shows other protesters chanting along with him at about the 1:05 mark:

The video also shows just how high that pile of discarded barricades got, high enough for the crowd to surge over the White House fence. That’s a serious security threat.

This protest was supposed to be about military veterans, but it’s tough to imagine that our best and bravest would stand around protesting under a racist, traitor’s flag. It’s a good bet that many of the people screaming at those cops were not veterans (Ted Cruz and Mike Lee aren’t), and it’s an even better bet that a bunch of those cops they were screaming at are veterans.

At any rate, until the government shutdown is over, they’re not being paid, so a horde of white people screaming “You work for us!” under a Confederate flag is, shall we say, not a good look. Doing so on the front lawn of the first black President, in front of the house where his children sleep? Our brave veterans fought, and many died, to preserve their right to do that, but just because something is your right doesn’t mean it is right.