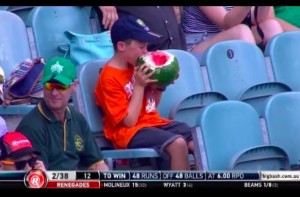 For many of us, New Year’s Day is the time to heal ourselves from a rough outing the night before, or to haplessly plan our resolutions for the coming calendar year. But for one boy sitting in the stands of a cricket game in Australia, the holiday is the perfect opportunity to, you know, eat an entire watermelon and become the next greatest sensation on the interwebs.

Ten Sport TV caught this amazing footage of a kid who DEVOURS an entire watermelon while sitting casually in his hat and orange tee-shirt.

The kid in question became a sensation as he chomped away on the fruit — from the outside — often holding it over his head like a champion holding his prized cricket trophy. Legend of the #WatermelonBoy quickly spread throughout social media:

And the first legend status of 2016 goes to #watermelonboy.. #Cricket pic.twitter.com/4zXsWQdu6K

The boy is the son of Melbourne sports reporter Tony Schibeci, who has been updating his own Twitter page with the latest from the viral star…

…including a post-feast shot of the young prince snoozing with his mostly-eaten melon at his side:

We will update this post with the latest in the #WatermelonBoy story.