We Have to Keep Talking About the Trump University Settlement
Opinion

We Have to Keep Talking About the Trump University Settlement 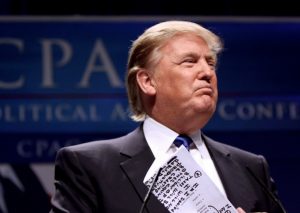 Listen. We need to keep talking about President-elect Donald Trump settling a lawsuit for $25 million after essentially living by a motto of “Never settle.” It was a huge story — for a day. It needs to be a huge story in general.

Over the next four years, we will need to learn to pay attention and not be distracted by tweets about Broadway shows or totally false claims that millions of people voted illegally. When the news about the Trump U settlement broke, everyone in the media failed the test by breathlessly reporting on Hamilton instead, but we still have time to make it right by doubling down on our efforts to focus, pay attention, and not go for the low-hanging fruit when the bigger stories are just a few branches higher.

Earlier this month, Trump dodged his press pool, which raised a number of questions in the media. How much transparency will we get in a Trump presidency? Will he even have a press pool once he becomes President? How will the American people know what the President is up to?

This is not a time to be fawning over tweets that prominently feature lies and base complaints. It is a time to question what those tweets are meant to be distracting us from. For days now, the tweets have been designed to distract from the Trump U settlement and, in a way, the recount taking place in certain states across the country.

Trump brushed off the fact that he settled in spite of his numerous claims that he never settles by saying he wanted to focus on America’s problems and we ate that up because he said it in a tweet. It’s important not to fall into that trap. It’s important to stay vigilant and question everything.

This is not to say there is no place for stories about Hamilton or SNL. There is absolutely a place for those stories, but when they outnumber real reporting on the implications of a President-elect settling a fraud case for $25 million, reconfiguring is in order.

We don’t know what a Trump presidency will look like in terms of transparency, but we do know that what appears to be a very transparent Twitter account is actually just a smokescreen, so we all need to start practicing discerning the real news from the fluff.