When Abraham Lincoln Went on Between Two Ferns

When Abraham Lincoln Went on Between Two Ferns 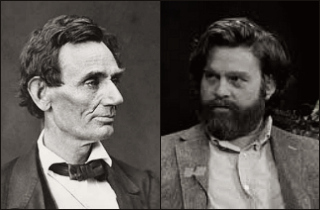 [Disclaimer: Abraham Lincoln did not actually appear on Between Two Ferns. Also: for those who are seemingly unaware, Between Two Ferns is an online comedy show; not a serious interview series.]

ZG: Mr. Day-Lewis, when people ask you how you prepare for a role, do you slap them in the face with an Oscar and say, “I’m Daniel F-ing-Day-Lewis. Silence or I’ll become you next?”

ZG: Did you pick your next role from a BuzzFeed quiz, Danny?

ZG: Oh right, you’re in “character.” I’ll play along (friggin’ method actors). President Lincoln, when it comes to the emaciated proclamation, do you want every American starved or just the ones who are shorter than you?

AL: It is the Emancipation Proclamation.

ZG: Here we go, emancipation.gov? That’s the one that doesn’t even cover 500,000 slaves in the border states. I heard it’s a complete Lincoln.

ZG: That’s what people are saying when someone is married to an absolutely insane idea or a Mary Todd.

AL: You dislike the Emancipation Proclamation; and, perhaps, would have it retracted. You say it is unconstitutional — I think differently.

ZG: Okay, let’s get to the real Booth in the booth. Why, Daniel, on this hollow ground between two ferns would you push something that works about as well as your stage beard.

AL: As our case is new, so we must think anew, and act anew.

AL: I want this to go viral, basically. I know how to play the game.

ZG: My beard does trend younger than yours.

ZG: In a house divided, how do you get to the bathroom?

AL: You are nothing more than a well-meaning baboon.

ZG: Wait, why are you here again?

AL: When the conduct of men is designed to be influenced, persuasion– kind, unassuming persuasion– should ever be adopted. It is an old and a true maxim, that a “drop of honey catches more flies than a gallon of gall.

ZG: Do you have anything to say to the four scores of critics who think you are the worst President in the history of all that is historical? Like a quick slam. Maybe a yo cabin joke? Yo cabin is so…

ZG: But seriously it’s a little stupid, you being here.

AL: I fully appreciate the present peril the country is in, and the weight of responsibility on me.