Which GOP Candidate Will the Koch Brothers Support in the Primary?

Which GOP Candidate Will the Koch Brothers Support in the Primary? 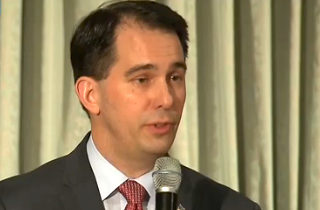 Billionaire brothers Charles and David Koch have a history of financially supporting Republican candidates and causes — and doing so found themselves the subject of Senate Minority Leader Harry Reid‘s (D-NV) fierce criticisms last year. And today, they reportedly revealed who they’re supporting in the 2016 GOP primary: Wisconsin Gov. Scott Walker.

“We will support whoever the candidate is,” David Koch said at a fundraising event for the New York State Republican Party in Manhattan, according to the New York Times, citing two people who were present. “But it should be Scott Walker.”

The two unnamed attendees also said the Kochs might personally give money to Walker’s campaign effort as well. Koch did suggest, though, that the political organizations he and his brother administer — which include super PACs and other grassroots organizations — would not pledge support for a candidate during the Republican primary, the Times reported.

Many declared and potential GOP candidates have attempted to garner the influential Koch brothers’ support during what is commonly known as the “invisible primary,” a period where candidates seek the monetary support of some of the party’s biggest donors before votes are even cast.

Walker is expected to join Senators Ted Cruz, Rand Paul and Marco Rubio in a crowded field of GOP contenders that will likely soon include Jeb Bush, Carly Fiorina, Ben Carson, Mike Huckabee and others.

David Koch says in a statement that while he thinks Walker is terrific, he is not "endorsing or supporting" any 2016 candidate right now.