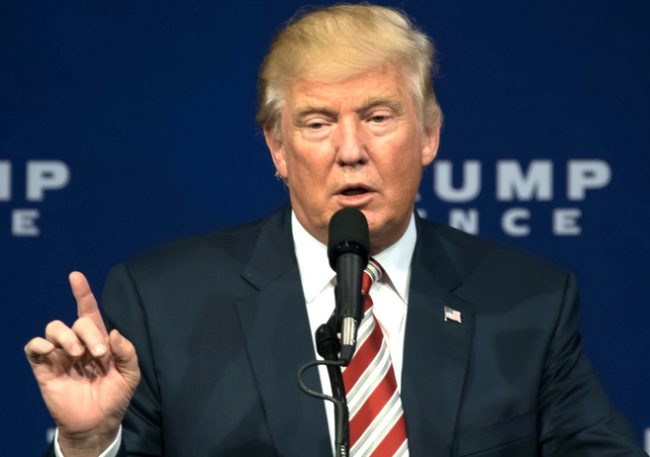 Let’s start by stating the obvious: President Trump seems to puff up like a teddy bear when it comes to one foreign power — Russia.

Although there’s been no concrete evidence provided linking Trump or his campaign to the dissemination of stolen emails from the DNC and Hillary Clinton’s campaign, there is mounting evidence that top campaign officials were in consistent communication with Russia.

Now-fired National Security Adviser Michael Flynn was thrown under the bus for having a call with a Russian ambassador where he allegedly hinted at sanctions relief before Trump was sworn in. There’s also evidence Flynn called the Russian ambassador to the U.S. five times on December 29th — the day former President Obama expelled 35 Russian diplomats from the U.S. — presumably to soothe Russia’s concerns and foreshadow a friendlier incoming Trump administration. And we now know Trump’s former campaign manager Paul Manafort and Flynn were both in communication with Russian officials during the campaign.

These revelations come in as the backdrop to a president railing about countless other countries’ threats to America, but treating Russia, an autocratic country who’s perpetrated countless human rights violations and assassinations, with kid gloves.

This by itself isn’t damning evidence of a major scandal. But it does beg more questions as to why our brash, impulsive president treats Russia so gently (most likely because he is trying to hide the fact that he’s done a lot of business with Russia).

However, that’s where it ends, despite the corporate-media-industrial-complex’s hyperventilation in the wake of Flynn’s resignation. CNN, MSNBC, and the rest of the usual suspects have been foaming at the mouth about Flynn’s call with the Russian ambassador, depicting it akin to some type of sinister, foreign Watergate. 24/7 coverage has been dedicated to this call — and speculation about other communications between Team Trump and Russia — with cable news outlets booking card-carrying neocons who predictably call for special prosecutors while pounding their chests like they always do before before leading us into a war.

Does it deserve coverage? Absolutely: Russia is no innocent flower — they are a nuclear power and strong ally of Syria, another country with an autocratic leader with documented human rights abuses toward its own people. But the making-of-a-scandal coverage of anything related to Russia and Trump — coverage happening for months — continues, while real scandals happen all over the U.S.

Where is the breathless cable news coverage of President Trump ramming through an oil pipeline under the longest river in the United States that he’s personally invested in? Can you imagine if it were President Clinton who was invested in the Dakota Access Pipeline, who, within her first days in office, signed an executive order to toss out a vital environmental impact study on the project and ram it through? Fox News would be howling for impeachment and other media outlets would be swarming with coverage.

But to date, there’s been shamefully little coverage of blatant conflicts of interest linked to this pipeline: from Trump to Energy Secretary Rick Perry, who was literally on the board of directors of DAPL’s parent company before being nominated and raked in hundreds of thousands of dollars.

There’s also been nothing from the news media on blatant corruption. Nor on the environmental risk this pipeline poses. Or on the ongoing pipeline spills and explosions happening on a weekly basis. Or on the North Dakota police force and legal system railroading Native Americans and non-Natives with concocted charges.

Then there’s East Chicago, Indiana which was just declared a disaster emergency by Indiana Governor Eric Holcomb. Besides there being scarce coverage for months on this predominately Latino and African American community being lead-poisoned for decades, there’s also no coverage of scandalous inaction by former Governor and current Vice President Mike Pence. Besides denying the disaster declaration for East Chicago (must have not had much money left over after handing out millions in tax breaks for corporations to offshore jobs), Pence never even bothered to visit the contaminated city, which was found to have a low-income housing unit with 212 times the “allowable limit” of lead in its ground soil in 2016.

Pence couldn’t find the time to care about black and brown folk, but he dramatically left the campaign trail in August to visit a white town struck by a tornado. According to the corporate media there’s nothing to see here; no need to investigate Pence’s inaction and yet another minority community poisoned by toxic lead in its water and soil.

Even more scandalous — and a blatant abuse of democracy — happened in South Dakota, where two weeks ago, the Republican legislature repealed an anti-corruption ballot measure that voters passed in November.

Whether President Trump is in the pocket of Vladimir Putin or even worse, being blackmailed, deserves serious investigation. The problem lies with the news media obsessively focusing on this one story, hyping it up with dramatic language and breaking news alerts (not accompanied by actual breaking news), while ignoring actual scandals impacting millions of Americans.

I guess it’s a whole lot cheaper to harp on the same topic 24/7, rinsing and repeating with the same ol’ pundits and columnists who make their (very good) money speculating and fearmongering than say, sending satellite trucks and reporting crews around the country to report on the very real scandals affecting people’s everyday lives.

No wonder the media has a 19 percent approval rating.