White People Get Off Easy In Django Unchained
video

White People Get Off Easy In Django Unchained 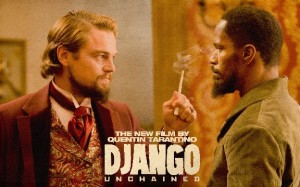 Quentin Tarantino‘s new film, Django Unchained, was creating a stir on the right before it was even released, with conservatives expressing panicky dismay at the film’s presumed anti-white message, and star Jamie Foxx‘s opening monologue on Saturday Night Live, in which he joked about killing “all the white people” in the movie. On the other hand, acclaimed director Spike Lee vowed not to see the film because he felt it was “disrespectful” to his ancestors to reduce slavery to a spaghetti western, and there has been widespread criticism of the script’s pervasive use of the n-word. Having just seen the film, I can assure all concerned that white people get off easy in this film, the n-word isn’t used too much in it, and Spike Lee may or may not have a point, but as an artist, he ought to see it before rendering judgment.

It was Lee’s criticism that made me rush out to see the film today, because I expected to come back and write that he was wrong, that Tarantino’s film had simultaneously subverted and perfected the conventions of its multiple genres, while delivering a brutal critique of slavery, and an even more brutal, cathartic climax. Lee’s criticism seemed to be based on the premise that it’s not possible to make a genre movie that’s also an Important Film, but if anyone is equipped to do that, it’s a filmmaker like Quentin Tarantino. There’s ample evidence to support those expectations in Tarantino’s body of flawed, yet always ambitious, work (particularly the dazzling Kill Bill), and in the hand-wringing which has attended Django Unchained‘s release, but alas, these expectations were not met.

The complaints about the n-word turned out to be the most puzzling, since the film is set in the slavery-era South, and while the word is used frequently, it would have been distracting if it had not been. Tarantino’s brand of hood-pass racial “realism” has been grating in some of his other films (notably, his own small role in Pulp Fiction), but here, the word fits.

The brutality fits, as well, and is attenuated to the film’s morality. Scenes depicting the violence of slavery, like the so-called “Mandingo fights” (bare-handed gladiator fights between slaves), are shown with unflinching realism, eschewing the stylized splatter reserved for the gunfights. There are several memorable scenes like this, but in its depiction of exceptional sadism, the film fails to capture the baseline cruelty of slavery, the everyday cruelty that made psychopaths of an entire nation.

It’s that missing ingredient which obscures one of Django Unchained‘s most interesting, and subtle, character threads. The film centers around Jamie Foxx’s Django, a slave freed by Christoph Waltz‘s bounty hunter/erstwhile dentist, Dr. King Schultz, after Django helps gim track a trio of fugitive overseers. Django reserves all of his  steely determination for his quest to rescue his wife, Kerry Washington‘s Broomhilda von Shaft, from Leonardo DiCaprio‘s evil plantation owner. The plight of his fellow slaves, while no source of joy, is absent from Django’s motivations. Slavery is a fact of life to him, something to be escaped and avoided, but a fact of life, nonetheless, and even as he’s trying to rescue Broomhilda, he largely works within that system. It’s the crusader-at-heart bounty hunter King Schultz whose revulsion at the institution gets the better of him, time and again. It’s a subtle statement about the nature of oppression, and the difference between the oppressed and the privileged, however well-intentioned.

In fact (SPOILER ALERT), it’s Waltz’s character who forces Django into taking his revenge with an act of impulsive rage, touching off a bloody gun battle that’s staged with an echo of Kill Bill Vol. One‘s tour de force climax, a visual reference that the scene fails to live up to. Mostly true to his word, Jamie Foxx kills a lot of white people in this movie, but he doesn’t kill all of them, and if you know your history, the history that Tarantino offers some hard but isolated glimpses at, he doesn’t kill nearly enough of them. Tarantino turned Hitler’s head into a bullet-piñata in Inglorious Basterds, so perhaps the comeuppance in this film was bound to be a letdown. Maybe that was the point, to give Django his retribution, but to deny the audience theirs.

Django Unchained is most satisfying as a toned-down spaghetti western, with somewhat muted homages to the directorial style of folks like Sergio Leone and Sam Peckinpaugh. Unlike some of Tarantino’s other genre mashups, Django Unchained doesn’t beat you over the head with its visual language, and the form accentuates one of the film’s best assets, the chemistry between Django and Schultz.

Spike Lee may be right, maybe it is disrespectful to try and make a genre film, even an Important Genre Film, about slavery. Part of being white is having no idea what that feels like. But Spike is an artist, too, and he knows that the canvas isn’t the measure of an artwork. Whatever its failings, Django Unchained doesn’t feel disrespectful to the memory of slavery, even though it falls short of capturing it.