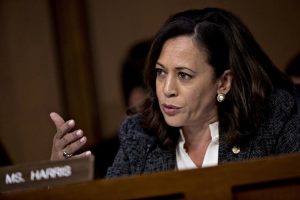 Last month, Democratic donors began to eye and even outright declare for California Sen. Kamala Harris, California’s former attorney general who is currently a fierce advocate for health care, women’s rights, and criminal justice reform. But over the past week, a report about hostility toward Harris from Bernie Sanders supporters began to circulate on Twitter with mixed responses.

So we're defending Kamala Harris from Republicans and Bernie Sanders base…. sounds familiar, we did the same with Hillary Clinton.

Harris has called health care “a right, not a privilege,” but has yet to come out endorsing universal health care; she’s called for tuition-free community college but doesn’t seem quite ready to go the Bernie Sanders route and broadly call for tuition-free public education.

Of course, this isn’t exactly unreasonable — a golden rule of politics is to avoid making promises you don’t know you’ll be able to deliver on, but the promise to fight for universal health care or fight for tuition-free public education is probably what Sanders supporters are looking for.

But what’s rubbing a lot of left activists the wrong way is her past as a prosecutor. Harris herself may be an African-American woman, but the African-American community and black activists are justifiably hostile to prosecutors — consider the War on Drugs, police brutality, mass incarceration, etc.

A cursory search of Harris’s record indicates that it’s somewhat mixed. She’s fought for-profit colleges, stood steady against bans on gay marriage, and worked to pass reforms to fight recidivism, but she’s also opposed private investigations of police officers and been criticized in delays for confiscating firearms from dangerous citizens and, as district attorney, Harris has also been hit with accusations of lack of transparency by a Superior Court judge.

But Harris has spoken vocally against the War on Drugs, calling it an abject failure, and measures taken by attorney general Jeff Sessions to crack down on drug possession. In 2015, she introduced a program meant to help first-time, nonviolent drug offenders with education and life skills training. Presently, she’s working on legislation to improve conditions for incarcerated pregnant women, and bipartisan bail reform to reduce jail populations.

Others on Twitter are calling harsh far left criticism of Harris gendered, and a reflection of some Bernie supporters’ flat unwillingness to support a woman. Harris is imperfect, but perhaps on some level it’s fair to say that the only reason this imperfection matters is that we demand the perfection of and allow no room for mistakes for women in positions of power.

In either case, on a personal note, I find Harris authentic and likable, with a unique personal story and background, and firm convictions on as well as pragmatic ideas about how to protect civil, women’s and LGBT rights. My only concern is that she’s previously, decisively thrown herself in the “social issues are divisive, Democrats should stay away from identity politics” camp, a dangerous zone that’s recently, increasingly led Democrats to support candidates who oppose abortion and could be a slippery slope leading to a number of other compromises on human rights.

“[W]hen we wake up at 3 in the morning or something is troubling us, it is never through the lens of … our identity based on what other people have decided is our identity,” Harris told the Los Angeles Times in an April interview.

Matters of identity directly affect matters of economic security, and on issues regarding fundamental rights, no lawmaker claiming to be progressive should ever compromise, or suggest that compromise on these issues is OK.

It’s not too early to say that Kamala Harris is increasingly becoming a Democratic party star, and a potential presidential candidate — it’s just a bit early to say whether she’ll be the champion progressives should start rallying for.