Why Did Kidnapping Girls, but Not Burning Boys Alive, Wake Media Up to Boko Haram? 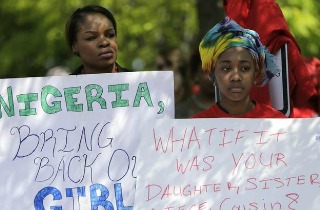 Since the Nigerian Islamic radical group Boko Haram kidnapped over 100 schoolgirls in mid-April, the media and the American government have been up in arms over this outrage. With over 200 girls in captivity, Boko Haram warned that they may sell the children into slavery.

Beginning the night of the kidnappings on April 16 and continuing ever since, the press has devoted relentless focus to the crisis in Nigeria. Nearly a block an hour on the three major cable news networks has been devoted raising awareness about the group, their medieval views, their aims, and the atrocities they have committed in the past.

The pressure exerted by the media moved the American government to action. President Barack Obama expressed revulsion over the kidnappings in interviews with local and network news personalities. House Speaker John Boehner joined Obama and said that, as a parent, he cannot imagine the horror of having your daughters kidnapped.

Sen. Barbara Mikulski (D-MD) pledged on Wednesday to join all the female members of the U.S. Senate to urge the United Nations and the international community to name Boko Haram as a known terrorist groups.

Secretary of State John Kerry has helped use the pressure in the Western media to force a recalcitrant Nigerian government to accept American assistance in recovering the kidnapped children.

Three weeks after their kidnappings began, Washington committed to dispatching American legal, intelligence, and military advisors to West Africa to aid in the search for the missing girls.

This focus on Boko Haram from both the media and the government is an unqualified good. The press arguably increased the pressure on global governments to do something about this backwards group of terrorists. But Boko Haram is not a new phenomenon. It was not long ago that some – including this author – were asking why this group’s atrocities were not generating any attention in the press.

On February 25, between 40 and 59 children were killed by the fundamentalist militant group. Early that morning, Boko Haram terrorists attacked a boarding school and shot many of children, aged 11 to 18, while they slept. Some of the students were gunned down as they attempted to flee. Others had their throats slit. In some buildings, Boko Haram militants locked the doors and set the building alight. The occupants were burned alive.

All of the victims were boys. Reports indicated that the young girls the militants encountered were spared. According to the BBC, the militants told the girls to flee, get married, and shun the western education to which they were privy.

Beyond wire reports and a handful of segments on globally-focused outlets like NPR, this atrocity went unremarked upon in the popular news media.

February 25 was not Boko Haram’s first atrocity. By March, more than 1,000 people had been killed in the country’s northeast since the first of the year. Prior to Boko Haram’s shift in tactics, from wholesale slaughter of young men to the kidnapping of young women, the group traveled from village to village where they killed children and razed buildings with near impunity.

The massacre in February prompted me to ask what the press found lacking in story surrounding Boko Haram’s atrocities that they would not cover it extensively. Was it a geographical bias? Was reporting from Western Africa more difficult than Beslan, Russia? There, hundreds of school children were massacred in 2004, and that event comprehensively covered in the Western press. Maybe there was simply an ethnic bias at play, and American audiences were prejudged to care less about atrocities in Africa than in Europe.

But the events of the last month have demonstrated that none of these explanations were accurate. Apparently, the press simply needed the right reason to cover this terrorist group and their brutal tactics. But an even more disturbing question needs to be asked now: why did the press spring to action when young women were kidnapped, but were virtually unmoved when it was young boys who were being slaughtered and burned alive?