Will Copy-Editing Make A Comeback? Let’s Hope So

Will Copy-Editing Make A Comeback? Let’s Hope So 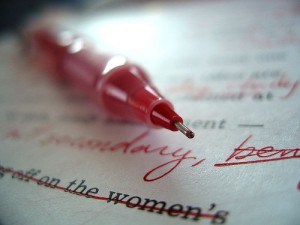 If readers feel like online publications (or the online counterparts to print publications) are often poorly edited or have an unusually large number of typos, they aren’t imagining things. In entering the digital age, copy-editing standards seem to have become more lenient. The Atlantic‘s Alexis Madrigal makes the case for why copy-editing might make a comeback. For journalism’s sake, let’s hope he’s right.

Madrigal reminds us why editors — and their red pens — are necessary, but points out that they seem like a dying breed:

In other words, editors do the things for text that designers did for visual products. They standardize rules; they enforce consistency; they provide the key for the map; they make things right.

And yet, in recent years, they’ve seemed expendable, perhaps because they were still around. Now, though, they’re disappearing. Text goes online with less editing than it would have ever gone into magazines or newspaper. More and more of us writers are working without their services. More and more people are writing without ever having being edited. Maybe now people will realize what editors did: their presence will be felt in their absence.

The Internet can feel like a jungle, and journalists are in the business of providing paths through the territory. Writers might blaze the trails, but editors maintain the roads. The vines are creeping and the potholes are growing. And maybe letting the road deteriorate is really the only way to make audiences and media companies realize the value of those whose names do not appear underneath the headline.

We don’t realize what we’ve had until it’s gone. In this case, it’s edited and polished prose. Editing is necessary in the same way that fact-checking is — yet in the 24/7 news cycle, it’s often overlooked in order to save time. Perhaps it’s because publishing something online feels less concrete than ink on paper, but that’s hardly an excuse. Just as this post will be edited before it is published, it makes sense that others should be too — even if they’re only online.