The Bechdel Test For Movies (And Media?)

The Bechdel Test For Movies (And Media?) 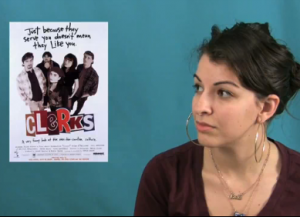 Via Boing Boing (via Good Magazine) today comes something fascinating, hilarious, sad and head-bonking that I’d never heard of: The Bechdel Test for Women In Film. Per Good:

The Bechdel test—named for the cartoonist Alison Bechdel who wrote a long-running comic strip called Dykes To Watch Out For and the critically acclaimed graphic novel Fun Home—is a test to assess whether women have a meaningful presence in a movie. It consists of three questions.

1. Are there two or more women in it that have names?

2. Do they talk to each other?

3. Do they talk to each other about something other than a man?

Once you start thinking about it, you’ll be surprised by how many films don’t pass this test. In fact, there are entire genres (action-adventure, for example) that seem to fail the Bechdel test, by and large. This page has a year-by-year list of movies, along with their Bechdel status.

Wait, Princess Bride? “Inconceivable!” I thought, and then ran through scene after scene in my head, realizing it was true: Buttercup has but one scene with another woman — 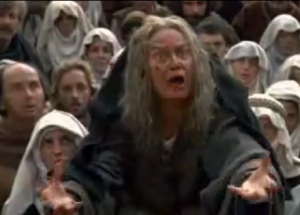 the witch in her dream. “BOOOOOOO!” yells the witch to Buttercup, castigating her about…a man. Noooo!

Some raise the point in the BoingBoing comments that some movies are just not meant to have women, like, say, Fight Club. Valid point, but…Shrek? Clerks? Lebowski? “Don’t be fatuous, Jeffrey,” snaps Maude, who has plenty to say that is not at all about men — she just only says it to men. It’s a test that is pointedly quality-blind — it’s not about whether a movie is good, or even if it stars a woman (Tomb Raider) — it’s just a flat, easily-applied test to chart raw female presence and non-man-related content in movies. And it’s extremely illuminating.

It got me thinking of my post yesterday on diversity, and wondered about a modified Bechdel test, based around #2: Are there more than one women, and do they talk to each other? When you think about it, that’s a relative rarity. Think of the Morning Joe regulars (Mika Brzezinski, Joe Scarborough, Willie Geist, Mike Barnicle with a rotating cast of characters including Mark Halperin, John Heilemann, someone from Politico…) — yes you have Savannah Guthrie, Melissa Harris-Lacewell and Gayle King like this morning, and Erin Burnett too, (and Shirley Sherrod, in a rather riveting interview, I must say). But think too of Sunday morning roundtables, prime-time panels, election-night specials…put it this way, the test of “Are there more than one, and are they talking to each other?” never fails when it’s applied to dudes.

I thought of that this morning, too, for a moment on Morning Joe when Jonathan Capehart and Melissa Harris-Lacewell were on the split-screen together. As I am clearly predisposed to do, I noticed the fact that Capehart and Harris-Lacewell were two African-American pundits, onscreen together…and how unusual a sight that was. The Modified Bechdel Test For Media is easily applied to any under-represented constituency.

I know that banging away at this drum is not the most popular beat for some — just like the Bechdel-failing Fight Club, a lot of people would prefer not to talk about this. But, I’m not one of them. BOOOOO! Video below.