Wisconsin Gov. Scott Walker Gave $81,500 A Year Job To Son Of One Of His Top Donors 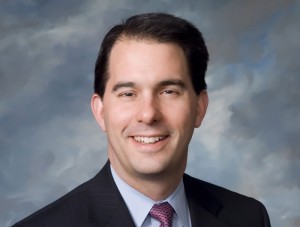 Wisconsin governor Scott Walker, who has been steadily losing ground among his state’s teachers and growing zombie population, can expect more criticism to come his way. The Governor, you see, gave the son of one of his top 5 donors a position paying $81,500 a year – including a promotion and a 26% raise in just two months’ time – all while Wisconsin continues to wage its very public struggle with state debt.

Brian Deschane, the enviable job-haver in question, happens to be the son of Jerry Deschane, who, as the Milwaukee Wisconsin Journal Sentinel points out, is a longtime lobbyist for the Wisconsin Builders Association – an organization that contributed $29,000 to Walker during his gubernatorial campaign. And that only represents just a portion of the group’s total contribution:

Even more impressive, members of the trade group funneled more than $92,000 through its conduit to Walker’s campaign over the past two years.

That’s big-time backing from the homebuilders.

The elder Deschane, for his part, insists his son obtained the job – overseeing environmental and regulatory matters – entirely on his own merits, although he admits he “put in good words for every one of my children in their jobs.” Additionally, he “might have reminded” Walker’s campaign manager / chief of staff, Keith Gilkes, that his son “was out there and available.”

The younger Deschane’s plum job is also drawing attention due to the fact that he does not have a college degree nor much experience with management, but does have two convictions for drunk driving.

Assuming, however, that Deschane is qualified for his position, is his sizable raise justifiable given Wisconsin’s economic woes – the very same economic woes that have placed Governor Walker firmly in the spotlight?