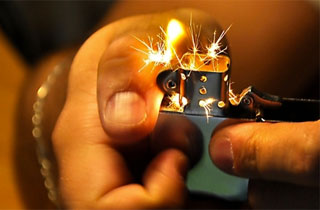 It’s time to kill a trend when people use it to explain dumb things, like, for instance, why one lit their boyfriend on fire.

Florida woman Necole Stephens was arrested last week after she doused her boyfriend in “medical” rubbing alcohol and lit him on fire, causing burns on 20% of his body. According to the boyfriend, she’d done so after she caught him texting, but Stephens had a different story, says The Smoking Gun: “She told him that the victim was participating in the ‘alcohol challenge’ and things went awry.”

Stephens also claimed that she was “scared” that she lit her boyfriend on fire, and so she ran. Deputies didn’t believe her (especially after she refused to return to the crime scene to talk to cops), and eventually located and arrested her.

Surprisingly, the “alcohol challenge” is not something Stephens made up in the heat of the moment (we’re sorry): it is an actual thing that dumb kids on YouTube do. As the Washington Post explains, it somewhat predates the Ice Bucket Challenge and is popular with the youths:

The so-called challenge consists of pouring rubbing alcohol on oneself, lighting it on fire, and putting the resulting blaze out before you sustain third-degree burns and/or burn your house down. Needless to say, not everyone succeeds — a 15-year-old in Kentucky sustained second-degree burns this week.

Why, precisely, would you do such a thing? In the words of one enraged YouTube vlogger, whose rant against the trend has earned almost 10,000 views: “Are you dumb? No, seriously … It’s mad dumb, but y’all are doing it like it’s an [expletive] trend.”