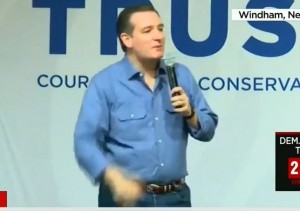 As the back-and-forth-and-back again continues over the Ted Cruz campaign’s dissemination of false information during the Iowa caucuses continues into a third day, Cruz surrogates and fans continue to either feign ignorance or display genuine examples of it by cherry-picking “evidence” to support their contention that it was CNN reporters who started the rumor that Ben Carson was “skipping” campaigning in South Carolina and New Hampshire and dropping out of the presidential race. This is a lie.

You don’t have to take left-wing liberal Tommy Christopher’s word for it, either. Here’s CNN’s Jake Tapper, as respected a journalist as there is in politics, explaining it:

“Carson looks like he is out. Iowans need to know before they vote, most will go to Cruz, I hope.” That’s not what CNN reported.

CNN never reported that Carson was out, or making a big announcement next week.

Anyone who’s honest or able to follow a clear sequence of events already understands this, but for the Cruz fans and surrogates who keep trying to play a shell game with the truth, let this serve as the “For Dummies” edition.

The rumor was started by Rep. Steve King with a pair of tweets that were sent at 8:19 pm Eastern time Monday night.

#iacaucus Skipping NH & SC is the equivalent of suspending. Too bad this information won’t get to all caucus goers. https://t.co/lW5Js50EMA

So, at 8:19 pm, King says Carson is “skipping NH&SC,” which is the “equivalent of suspending,” and that Carson “looks like he is out,” the clear meaning being that Ben Carson is going to skip all campaigning in the next two states and drop out. Here is the tweet King was directly linking to, from CNN reporter Chris Moody, and sent at 7:43 pm:

Carson won’t go to NH/SC, but instead will head home to Florida for some R&R. He’ll be in DC Thursday for the National Prayer Breakfast.

Now, if you’d like to be charitable and say that King misunderstood, or that he wasn’t trying to infer that Carson had canceled all campaigning (neither option comports with reason), King would still need to explain why he insisted Carson was “out” when Moody tweeted this at the exact same time:

Ben Carson’s campaign tells me he plans to stay in the race beyond Iowa no matter what the results are tonight.

So, right there, the case is closed. The Cruz campaign claimed they should have updated their staff when CNN “updated” their “reporting,” but it was there all along: Carson “plans to stay in the race beyond Iowa no matter what.”

People keep sending screenshots and partial quotes to try and support Cruz’s campaign, but there is nothing in any of CNN’s reporting to indicate that Carson was “skipping” anything, just that he was going to Florida for a few days. It wasn’t in the video featured in this tweet, which features Jake Tapper and Dana Bash explicitly explaining that the Carson “news” refers to his schedule in the middle of this week. Again, nothing about Carson dropping out or making any big announcement.

The news was also reported on-air by Jake Tapper, who made it clear this news was only about Carson’s schedule for the middle of this week:

So please, save your tweets. Sending me a screenshot of Moody tweeting that Carson “won’t go to NH/SC,” that is not proof that CNN reported Carson would be “skipping” anything, or that Carson would be dropping out of the race, because Moody reported the exact opposite of that at that exact moment. Ditto a quote from Dana Bash saying Carson “won’t go” to South Carolina, because she went on to explain that she meant Tuesday or Wednesday, not forever. And no one anywhere on CNN ever suggested or hinted that Ben Carson might be dropping out. It did not happen. The Cruz campaign lied to voters in Iowa, and lied again when they blamed it on CNN.

UPDATE –– 7:23 pm EST: CNN has a statement out tonight emphasizing that the Cruz campaign’s claims are false: