With the Russia probes and special counsel Robert Mueller’s investigation heating up, we’ve heard one phrase repeated over and over by President Donald Trump to describe the situation — “witch hunt.” And he continued that trend today, sending out a couple of tweets using the term:

Despite the phony Witch Hunt going on in America, the economic & jobs numbers are great. Regulations way down, jobs and enthusiasm way up!

That last one, by the way, essentially confirmed earlier reporting that Mueller is now investigating Trump for obstruction of justice.

Well, Trump’s not the first president who was facing charges of obstruction of justice only to complain that all of the attention was unwarranted. Flashback to 1973 and one President Richard Nixon: 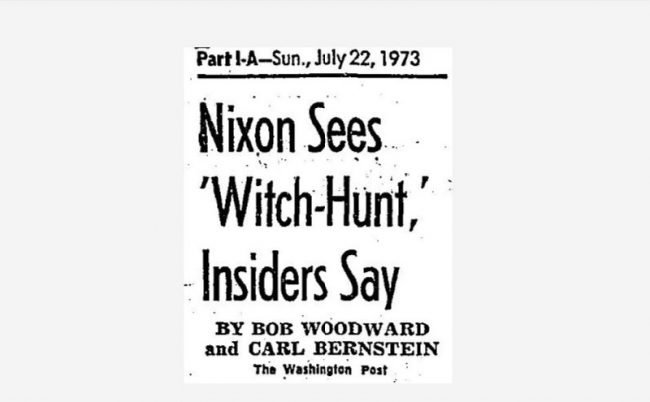 Yep, good ol’ Tricky Dick spouted those words while dealing with Watergate, which eventually brought his presidency down as he resigned rather than face impeachment.

Meanwhile, many commentators, pundits, and politicians have drawn parallels between Trump and Nixon in recent months. Besides the whole obstruction of justice thing, many described FBI Director James Comey’s firing as the Tuesday Night Massacre, obviously referencing Nixon’s own Saturday Night Massacre.