Your Move, Media: The Obama Administration Dares The Press To Respond To Intimidation Tactics 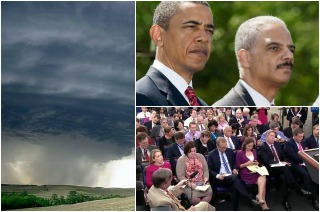 These are historic and troubling times. The unprecedented and brazen efforts by high-ranking elements within the Obama administration to silence whistleblowers and intimidate any reporters that would speak with them have starkly framed the choice the political press now faces. The administration has thrown the gauntlet down before the media with their display of abject disregard for the watchdog Fourth Estate. To the White House’s chagrin, the media will respond.

In a two-fold assault on the freedom of the press, President Barack Obama’s Department of Justice has been implicated in efforts designed to intimidate both the press and their sources.

The DOJ’s acquisition of the two months of phone records from the Associated Press represents an audacious attempt to scare government officials, burdened with pangs of conscience, to stifle their desire to blow the whistle on malfeasance within their own departments.

The DOJ subpoenaed the records for 21 phone lines in five separate AP offices, including a line that had been inactive for six years. Those lines have been used by at least 100 reporters and reveal tradecraft and methods that AP reporters use to gather facts and build cases in their reporting.

Those that withheld judgment about the AP scandal in its earliest days were right to do so. Attorney General Eric Holder assured the media that the leaker who spoke to the AP, whom the Justice Department was attempting to ferret out, “put the American people at risk.” Such a grave charge demands caution. The benefit of the doubt should be extended to the government before it is accused of overreach. But, in the days that followed, it was discovered that the AP had cooperated with the DOJ to hold off on publishing the details of the story — a successful strike in Yemen which resulted in the death of a terror suspect — and only ran with the story after they were assured by federal officials that publishing the information would not jeopardize American national security.

“Officials that would normally talk to us and people we talk to in the normal course of news gathering are already saying to us that they’re a little reluctant to talk to us,” said AP chief Gary Pruitt on CBS News’ Face the Nation on Sunday. “They fear that they will be monitored by the government.”

In what has been described as a “fishing expedition” in its scope, the AP scandal was “chilling” for the media as an institution. The news that broke yesterday, however, has focused the minds of every individual reporter as they learned that they could be personally targeted by this administration.

It was revealed on Monday that Fox News reporter James Rosen’s movements within the State Department were tracked, his phone calls logged, and his personal emails seized and scrutinized by federal investigators. Why? Because Rosen had committed the offense – not the crime – of developing a source within the nation’s diplomatic establishment. The Justice Department labeled Rosen a “co-conspirator” in their leak investigation — another effort to criminalize reporting practices which is without parallel in the history of the republic.

These offenses cannot stand. The hubristic impulses of Obama administration appointees that undoubtedly approved of these efforts must be checked. These offenses amount to calculated efforts to intimidate. An administration that was wary of how the press would react to these excessive tactics would have exercised more caution. But this White House and its appointees do not fear reporters.

The Obama administration dares the press to respond to these provocations in a traditional, adversarial fashion. This White House has taken the support they enjoyed from the press corps during Obama’s first term for granted. Today, the media simmers, having been dismissed as a potent force capable of holding this White House accountable, eager to demonstrate just how effective they are.

The White House has greatly underestimated the press and their reverence for the sacred function they perform in a healthy democracy. The political media’s admiration for the president, someone who largely shares their philosophy and pedigree, is a pale shadow in comparison to the esteem with which they hold their own institution.

A storm is coming for the Obama administration. There is no stronger animosity than the one born of spurned affection. Now legitimately mistreated and aggrieved, the press is coming for this White House.