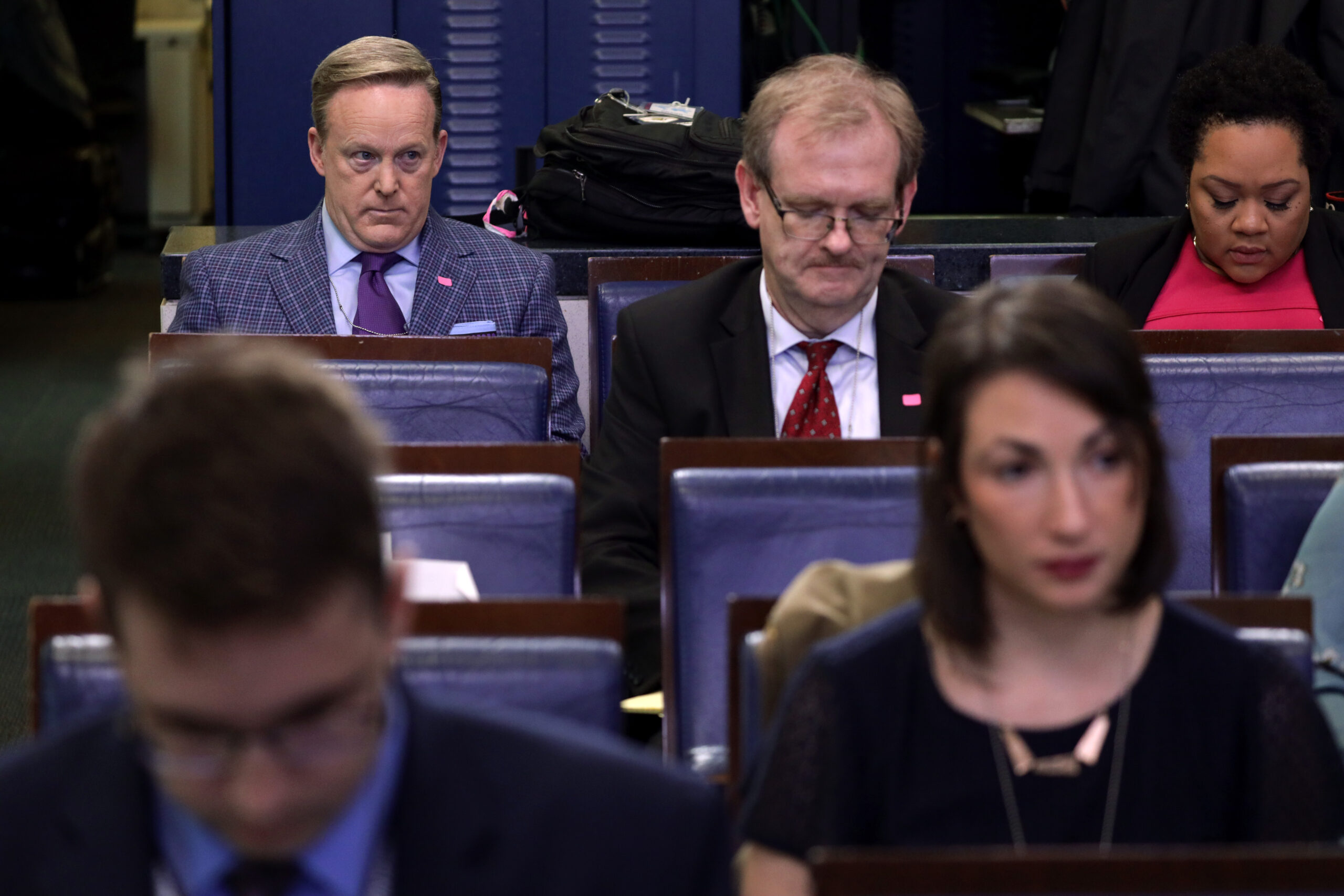 Sean Spicer spoke to Mediaite on the latest episode of The Interview podcast about his time in the Trump White House, hosting a cable news show, the 2020 election, and the Jan. 6 riot at the U.S. Capitol.

Spicer was, of course, the first press secretary for President Donald Trump. He left the White House in 2017 and went on to appear on Dancing With the Stars, pop up at the Emmys, and hold a series of media jobs before eventually landing at Newsmax, where he anchors his own show. Spicer, who is out with a new book on Oct. 26 — Radical Nation: Joe Biden and Kamala Harris’s Dangerous Plan for America — told me he hopes to remain in news for good.

“It’s something I would have never thought I’d be doing, but I love it,” he said. “It’s kind of cool to be sitting on the other side of the table, if you will. But what’s more fun is waking up in the morning and realizing what’s happening. And instead of just being able to complain or send a tweet, I can go like, let’s get that guest. Let’s talk about this subject.”

We spoke about what he felt watching the 2020 election and its fallout, when Trump claimed victory despite losing to current President Joe Biden. I asked Spicer if he was concerned by the fact that Trump has, through a series of absurd conspiracy theories about the election, convinced a majority of Republican voters of the false claim that it was rigged.

“Yes, I think it’s very concerning,” Spicer said. “And you saw the fallout, frankly, in the Georgia Senate elections where we lost two seats, frankly, because a lot of people said, well, I’m not going to go out and vote if the system is [rigged].”

“You can’t win a race, frankly, in the R or the D side, if your base isn’t energized,” Spicer added. “And I think that when there are people that fundamentally don’t believe that the system is fair, you’re going to have a problem.”

I also asked about Newsmax’s role in pushing election conspiracies. Last month, elections tech company Dominion filed a defamation lawsuit against Newsmax and several other conservative television networks, alleging they spread false claims the firm rigged the 2020 election against Trump. Smartmatic, another elections tech company, demanded retractions from Newsmax over similar claims made against the company, prompting the network to air an extensive fact-check of election conspiracy theories.

“I’m not aware of any conspiracy theory that Newsmax pushed. So no, I’m very proud of our coverage actually,” Spicer replied.

When I noted the lawsuits, Spicer clarified.

“First of all, I will admittedly say that I’m not privy to any — but what I understand was the case is that a guest on Newsmax made some comments,” Spicer said. “So if the new standard is that a guest or a person that you interview can’t say something — I can speak for my own show, there is nothing, every single day that I’ve been on I have been proud of the show that we’ve done. I don’t think you can find a single instance. So I actually thought our coverage was was excellent, our analysis was great.”

Those election conspiracies culminated in the Jan. 6 riot at the U.S. Capitol, which Spicer has condemned. He said the attack was “personal” for him, as he spent “years of my life in those buildings.”

I asked Spicer if he would take a job on a Trump campaign or in a Trump White House should the former president run again in 2024.

No and no. Look, his isn’t a shocker. I said this at the beginning of our conversation. I love what I do now. I have found a sweet spot. I love and I will say this as far as Donald Trump goes, he is an intense guy to work for. I mean, he demands a lot of people who work for him. But since I’ve left, he’s been a good friend and he’s been unbelievably supportive of my endeavors of my work at Newsmax, my books. He voted for me on Dancing with the Stars. And so I’d much rather be a friend and a supporter than an employee. And as I said, I have really enjoyed working at Newsmax and being able to wake up every day and have a show that I get to do stuff. And and as you noted at the beginning, I’ve got a new book and it’s been fun putting that kind of stuff together. One last thing is that I did probably — I don’t know what the number is — 500 interviews over my six years at the at the RNC and my recognition level was like, you know, it was Christmas time and Joseph A. Banks in Alexandria and some guy in the sweater section was like, I think I know you. That was as close as I really came to to being recognized politically. That changed very quickly when I was in the White House. The intensity and the scrutiny is not something that I ever want to go through again personally or have my family do. I don’t need TV trucks outside of my lawn. I don’t think there’s a full appreciation of, you know, what the wear that that puts on an individual. And so I’m happy with what I do now. And I think someone else can can go do all those other things that I once did.

We also spoke about his condemnation of the Jan. 6 riot at the U.S. Capitol, dealing with fame as a former Trump official, and the performance of current White House press secretary Jen Psaki.