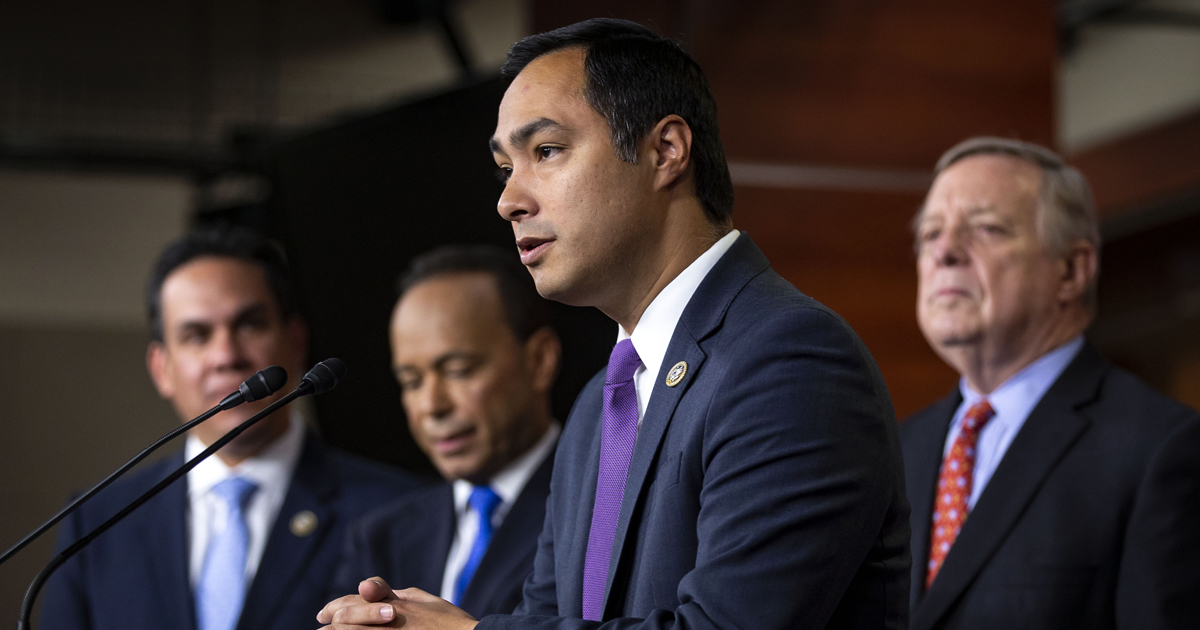 A tweet from Rep. Joaquin Castro absolutely exploded on Twitter, Tuesday, when he shared the names of private donors to President Trump who are residents of Austin, Texas, where Castro’s district is located.

His tweet was immediately taken by many on the right or Republican side of Twitter as an attack and incitement, and that reaction included the National Republican Congressional Committee (NRCC), which tweeted that Castro’s message was “disgusting” and “inciting violence against private citizens.”

Rep. Castro’s twin brother of course is current 2020 Democratic candidate Julián Castro, which surely played a part both in Rep. Castro’s tweet and in some of the responses.

This is disgusting. Inciting violence against private citizens for participating in our Democracy is beyond the pale. Your rabid hatred of @realDonaldTrump has made you deranged. https://t.co/vwj9a6EDiT

But by no means was the NRCC alone, as reaction lit across social media like wildfire. This is only a sample.

Nice business you got here, be a shame if something happened to it… https://t.co/hiaQw87FkH

In the wake of a horrific mass shooting, a member of Congress named the retirees in San Antonio who gave maximum political contributions to Trump. This seems like a dangerous escalation to me. https://t.co/X6Hr5izeul

This is dangerous and unethical.

A member of Congress is trying to send a mob after private individuals to punish them for their political speech. This will not end well. https://t.co/LYtZhDPqR7

This is designed to scare people away from their right of speech or expression and chill private donations with by suggested threat of doxxing. It’s shameful and dangerous. https://t.co/9Fj9oEMCmx

This is only one of the reasons Americans should be able to fund political causes in the dark. Americans shouldn’t have to deal with ugly public attacks on their businesses and families (or worse) because of their beliefs. https://t.co/SgRTMGN3hK

This is why political donations should no longer be made public. The left is weaponizing transparency to ensure donors to their political opponents are harassed, boycotted, or worse. https://t.co/xf4HR1s3NC

Not surprised a Castro would go after political dissidents like this… https://t.co/dy2TqFdyNZ

Democratic Member of Congress is targeting private citizens who made political donations to Trump. After the horrors of this weekend, we’ve all been talking about making our communities safer. Is this politician making these people safer? https://t.co/Aw9eFDg4B0

I’m sure all the hand wringers insisting Trump’s rhetoric is over the top will be ALL over this. https://t.co/GHcnndcu1Q

Wow, this is such a cowardly move. You want them to be harassed, boycotted, or worse. You sir, are a coward. https://t.co/ZGTinxSn6U

Public official – check
Naming the supporters of their opponent in hopes of inviting violence against them – check https://t.co/wY4dR1yx6w

Since he has no public stocks on which to shackle those with different viewpoints, he’ll use Twitter instead. https://t.co/tpoy0KdO4X

Nothing to see here. Just a sitting Member of Congress sending out the names/occupations of local private citizens who happen to strongly support the other party, for the purpose of stirring up local anger and retaliation against them.

This will not end well. https://t.co/zz0TTtULHP

Joaquin is taking his cues from @CNN, their crack research team, and allies who enjoy doxxing random private citizens. If Trump did this, @CNN and @MSNBC would be going bonkers with a segment every hour about this https://t.co/48TmbZfso7

Well done, Congressman, these retirees and homemakers will have to think twice next time before they leave the safety of their homes to vote against you. https://t.co/nzggRpgzgD

This is no time to devalue this word, but this is a terroristic threat. #JoaquinCastro smears constituents as hatemongers, knowing full well what the violent left has often done when drunk on the outrage of political bigotry. This cannot stand. https://t.co/A3WAxJCC2m

And it wasn’t even limited to conservatives or Republicans.

What are you trying to accomplish here, Rep. Castro? https://t.co/wVMZpNPOb2

In all, it doesn’t seem to have gone over too well.

UPDATE — 6:40 pm ET: Castro is standing by the tweet, tweeting the graphic “doesn’t have private or personal info — no addresses or phone #, etc. It’s publicly reported info printed in newspapers routinely from the @nyt to the @dcexaminer.”

First, the Indivisble@group’s graphic I shared doesn’t have private or personal info — no addresses or phone #, etc. It’s publicly reported info printed in newspapers routinely from the @nyt to the @dcexaminer. You know that. 1/ https://t.co/t6cdNckM1a

2nd, what I said is true — your campaign has stoked fear of brown-skinned immigrants. Those contributions hv been used to pay for over 2K @Facebook ads declaring an invasion by Hispanics.

That is truly dangerous for millions.
Will you commit not to run another ad like that? 2/2

Yashar, I respect your work and writing. I’m certain that NY Magazine and Huff Post have printed similar graphics with name and employer many times before because it’s not private and it’s publicly reported. There’s no private addresses, phone numbers, etc. No “call to action.” https://t.co/TxjoTITDbI

I would love to have a conversation with @Twitter and @Facebook about how I use their platforms versus how the President uses them. https://t.co/R6hAbQxQne