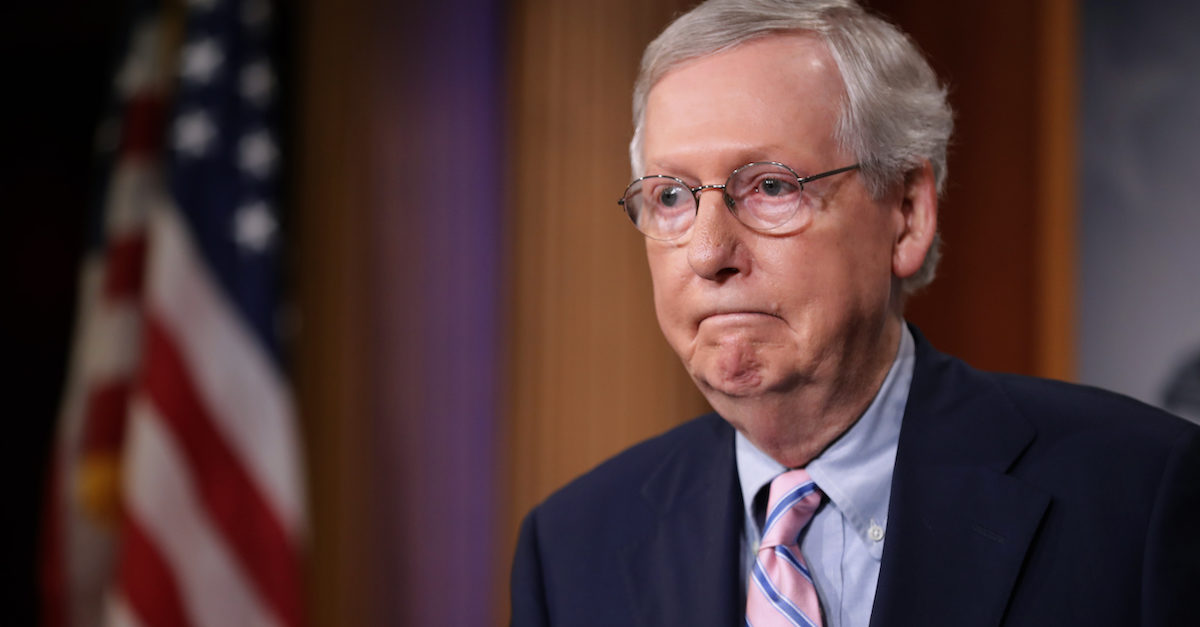 Senate Majority Leader Mitch McConnell revealed on Hannity Thursday night that he will be taking marching orders during an impeachment trial directly from President Donald Trump’s lawyers. This open admission of ignoring his Constitutional responsibility of overseeing the very checks and balances from co-equal branches of government has drawn understandable outrage.

“Everything I do during this, I’m coordinating with White House counsel,” McConnell said. “There will be no difference between the president’s position and our position as to how to handle this — to the extent that we can. We do not have the kind of ball control on this — a typical issue, for example, comes over from the House. If I don’t like it, we don’t take it up. We have no choice but to take it up. But we’ll be working through this process, hopefully in a short period of time, in total coordination with the White House counsel’s office and the people representing the president in the well of the Senate.”

He later added, “I’m going to take my cues from the president’s lawyers.”

Openly working with the lawyers who represent the defendant on trial has drawn predictable reaction on Twitter:

Hakeem Jeffries on McConnell’s comments about his plans to coordinate with Trump lawyers: ”In other words, the jury -Senate Republicans – are going to coordinate with the defendant – Donald Trump – on how exactly the kangaroo court is going to be run.” https://t.co/wamTcLuMpe

.@timkmak tells us Mitch McConnell will work hand in glove with the White House in preparing for Senate impeachment trial – which is akin to a jury collaborating with the accused. @UpFirst @MorningEdition

Someone should remind McConnell that the Constitution requires that the Senate act as a jury on impeachment. Imagine the foreman of a jury announcing before a trial that there will be no difference between the jury’s position and a defendant’s. https://t.co/IRRPbrjTPY

McConnell’s comments almost make me think Susan Collins just might full of you-know-what when she says, as a Senator, she will be a juror in the Trump impeachment and so must preserve an open mind. pic.twitter.com/Pi9vCosgSH

Bring the ratio but I’m not gonna light my hair on fire over the jury foreman in an inherently political trial confirming that he’s coordinating with the defendant’s lawyers for an outcome everyone knows is coming.

One could be shocked at the hypocrisy of it all, given that the GOP’s main complaint about the House impeachment process has been that it’s unfair (wrong) and predetermined (right).

But this is Mitch McConnell we’re talking about here. This is not shocking.

Justice Roberts will preside over the impeachment in the Senate. McConnell is a juror (one who should be disqualified IMO).