Charlie Kirk Digs Up Video of Himself Berating a Rabbi 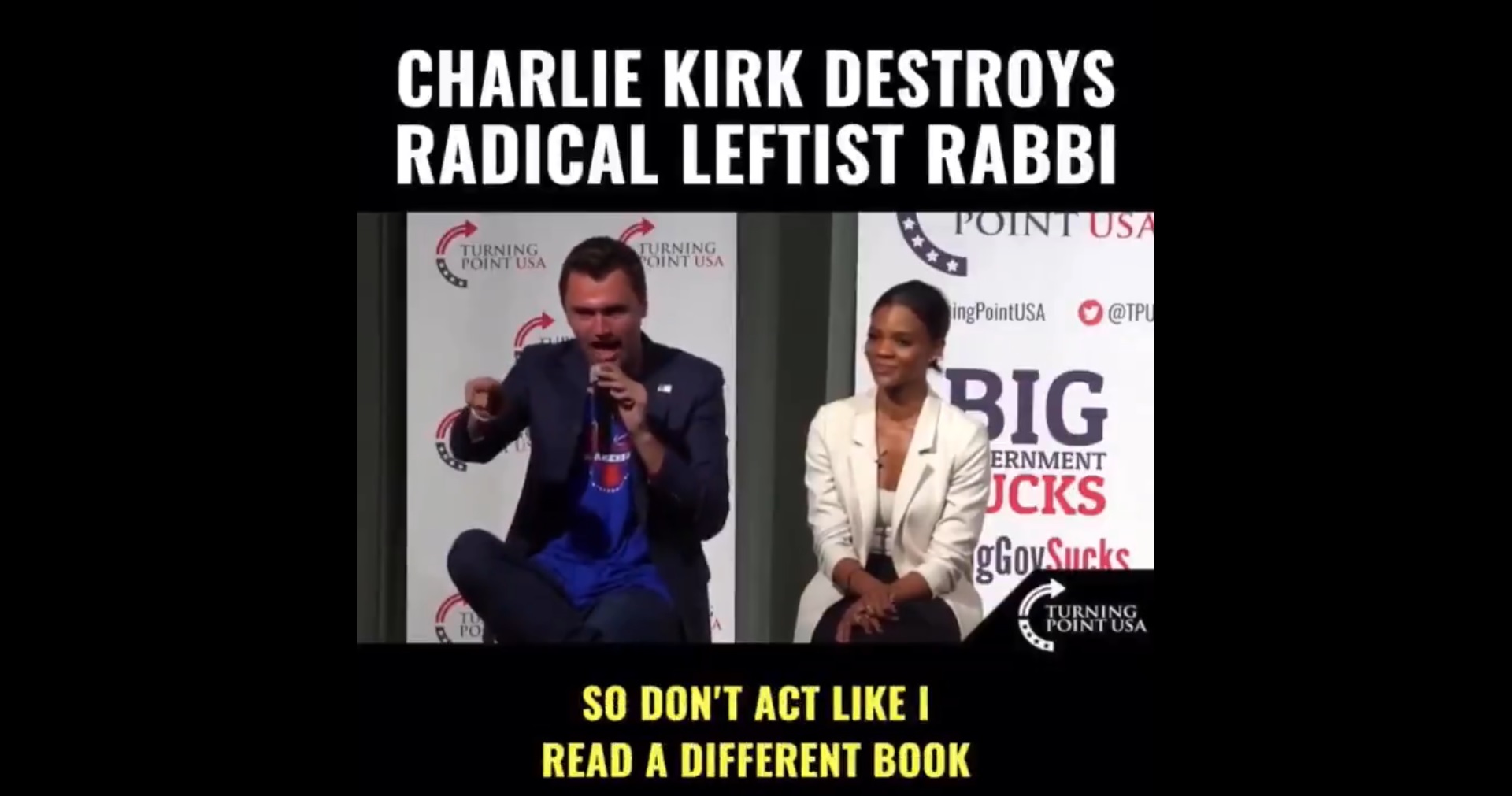 Turning Point USA founder Charlie Kirk was criticized on social media after he dug up and shared a 2018 video of him berating a rabbi about Judaism on Israel’s Holocaust Remembrance Day this week.

In the video, titled, “CHARLIE KIRK DESTROYS RADICAL LEFTIST RABBI,” a rabbi in the audience at one of Kirk’s events tells Kirk that “everybody in the United States should be educated regardless of their ability to pay.”

That prompted Kirk to ask, “Do you think that a Jewish day school does a better job of educating an individual than a public school?”

Never thought I as a Christian would have more reverence for the Holy Book than a rabbi. Must watch!

The rabbi responded, “I don’t believe in orthodoxy. They brainwash their kids, so I don’t like Jewish day schools.”

“Have you ever head of Reform or Reconstructionist Judaism?” the rabbi questioned, noting, “We don’t take the Torah literally.”

Kirk then screamed at the rabbi, “No, you absolutely take the Torah literally! It’s literally the Torah! Moses was given them for a reason,” leading the Rabbi to declare, “You don’t know anything about Judaism.”

“I don’t know anything about Judaism? Well I’m an Evangelical Christian,” Kirk shouted. “I bet you know slightly more in your particular blend…”

“I don’t know slightly more, I know a lot more, because it’s my religion!” the rabbi stated. ” You don’t have the right to tell me…”

Cutting off the rabbi, Kirk screamed, “No, I do have a right, because it’s America and I can say whatever the damn I want,” as his crowd went wild.

“Secondly, don’t act for a second that I have a different book than you. Genesis, Exodus, Leviticus, Numbers, and Deuteronomy is in my Bible just as it’s in yours, so don’t act like I read a different book!” he fumed, adding, “Finally, I would say it’s underneath the moral stature of a rabbi to tell someone like me that I don’t have a right to criticize you.”

“I will tell you that Jewish people have had Christians tells Jews what their religion means for a long time,” the rabbi shot back. “We do not need Christians to tell Jews what Judaism is all about.”

Kirk, however, concluded by telling the rabbi, “You will find no better or bigger defender of the State of Israel or the Jewish people than me. No one! Period. Bar none.”

Despite the fact that the video is from 2018, Kirk’s decision to dig it up clip and post it to his Instagram account on Tuesday raised eyebrows.

This video is incredible pic.twitter.com/RdpnxAzZFx

I can’t believe TPUSA would publish this themselves. It is so deeply embarassing for Charlie Kirk, and shows him to be an immature asshole who can’t actually have a real conversation/debate https://t.co/x6csdrgDlX

Charlie Kirk “destroys” Rabbi by telling him that he thinks about Judaism wrong after he starts losing an argument about public/private schools.

“I don’t know anything about Judaism? Well, I’m an Evangelical Christian. I bet you know *slightly* more in your particular blend…. I will say this, you will find no bigger or better defender of the state of Israel or the Jewish people than me.” https://t.co/KQZw1Sa0zA

Nothing says “defender of Judaism” like yelling at a rabbi about how he should read the Torah https://t.co/ZHwmJo3GxF

That Kirk chose to promote this video, which is objectively embarrassing for him, speaks volumes. The worst are full of passionate intensity. https://t.co/dpE2UJRE93