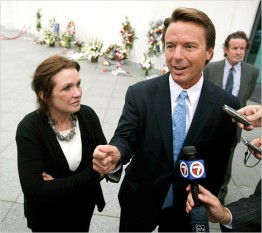 The New York Times is not going to be scooped by the National Enquirer anymore! The Times is running an A-1 story today about the latest developments in the John Edwards “drama,” which according to the story’s opening graf is “moving slowly but deliberately to its conclusion.” Slightly less slowly and perhaps more deliberately after this piece! Reading between the lines, it seems the New York Times got its hands on a hot book proposal and rushed its contents to press before anyone else was able to beat them to the punch, or, for that matter, go on record about it.

The crux of the article is ostensibly that a grand jury in North Carolina is involved in a “novel” ongoing investigation as to whether “any crimes were committed in connection with campaign laws in an effort to conceal [Edwards’] extramarital affair with a woman.” But it is almost immediately apparent that the investigation storyline is merely a leaping off point from which to quickly delve into the more sordid, and anonymously sourced, details of the Edwards’ personal lives. Details which include whether Edwards’ former mistress Rielle Hunter will shortly be moving with her infant daughter to North Carolina “as people who know” Hunter say she might be. But also that, according to “associates” of the family, Edwards may be considering claiming paternity of Hunter’s daughter except that according to “friends and other associates” Elizabeth Edwards “has resisted the idea.” Also! Rielle Hunter may have given her daughter the middle name Quinn — according to “people who have spoken with her” — because “its resemblance to the Latin prefix for five was to proclaim that the baby was Mr. Edwards’s fifth child.”

Riveting stuff! Worthy of the best sort of checkout line chatter, if not quite the sort of material one expects to qualify for the front page of the Sunday Times. So why is the Times jumping in right now? Well it seems someone at the Times offices got their hands on a book proposal by one Andrew Young. Young, you may recall, is the married, former Edwards aide who initially asserted in a affidavit that he was the father of Rielle Hunter’s child. He has recently recanted this assertion. And since Motoko Rich, who covers publishing for the NYT, has a contributing byline on this piece, one assumes the leaked proposal must have come through her well-connected desk. In fact, the most damning — and probably repeated — elements of this piece are apparently derived from Young’s proposal. To wit:

Mr. Young, who has since renounced that [that he is the father of Hunter’s child] statement, has told publishers in a book proposal that Mr. Edwards knew all along that he was the child’s father. He said Mr. Edwards pleaded with him to accept responsibility falsely, saying that would reduce the story to one of a political aide’s infidelity.

In the proposal, which The New York Times examined, Mr. Young asserts that he assisted the affair by setting up private meetings between Mr. Edwards and Ms. Hunter. He wrote that Mr. Edwards once calmed an anxious Ms. Hunter by promising her that after his wife died, he would marry her in a rooftop ceremony in New York with an appearance by the Dave Matthews Band.

Wow right!? That is the stuff of TV movies. Also the sort of assertions from which Edwards, whose admitted behavior thus far has been rather sickening, will likely never recover.

However there is something slightly more worrisome than Edward’s alleged behavior. The Times is paraphrasing from a book proposal that is currently out to publishers, with little outside corroboration. Book proposals of the non-fiction type are more or less a pitch by the author to prospective publishers laying out in short form what the author wants to write about and what qualifies the author (and ‘qualifies’ frequently means “saleable’) to do so. Basically it’s a written “why I am worth your money and time” pitch (though for the very famous it’s often a verbal pitch sealed with a handshake…remember saleable!), which publishers then consider and make offers on. Since according to the NYT, Young “has told publishers in a book proposal” it is safe to presume this proposal has just recently gone out to editors and has not yet been purchased, which raises questions as to whether the proposal itself has been properly vetted.

An author is free to say many things in a proposal — he or she is trying to get the publisher’s attention (and money), after all. Also their seal of approval; self-published books do not elicit the same immediate trust that say, the Knopf logo does. At the end of the day it is the publisher’s responsibility to vet and fact-check the contents of the manuscript during the editing process — a process which has notoriously gone awry more than once in the past few years, most notably with James Frey, but more recently in the case of Margaret Seltzer.

So was the proposal vetted? It may have been. It’s in both the author’s and the agent’s best interest to make sure what they are officially submitting to publishers as the truth is in fact as close to it as can be reasonably expected. But it is not guaranteed, and there is no formal process to ensure it beyond an established good faith between agents and editors. Moreover, these are tough times in publishing and celebrity sells. Not to mention, Andrew Young, the author of this proposal has already lied to the public-at-large in the form of the affidavit he signed claiming paternity of Hunter’s child. That in and of itself sets off some warning bells.

The Times says it has “examined” the proposal, so perhaps it is enough to trust that for whatever reasons they feel the proposal is trustworthy. That said, the Times also provides scant evidence beyond some vague anonymous quoting to back up the assertions Young makes in his proposal, and indeed fails to make clear whether they attempted to speak to Young directly. What is clear is that the New York Times definitely did not wait for the National Enquirer to do all the dirty work for them this time around! Also, that Edwards may spend the rest of his life digging out from under this, if that is even possible anymore.

UPDATE: A commenter points out that Mr. Young’s book proposal was actually sold to St. Martin’s in June (also reported in Rush&Molloy, which exactly where you’d expect to read this sort of thing). Which makes it all that stranger that a) there was no mention of the sale in this article and b) that the contents of the proposal, which the Times reported it had seen in June, only now made it to light.