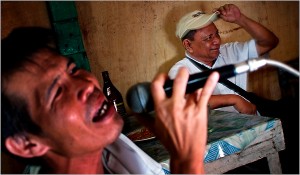 Perhaps you have already read the article in the New York Times World section today about the enormous amount of violence in the Philippines that seems to be caused by karaoke renditions of Frank Sinatra‘s “My Way.” Things have apparently gotten so bad that the Filipino media records the crimes under the subcategory of “My Way Killings.” Though it might get lost in the kerfuffle surrounding the Times Sunday Styles section’s idiotic trend piece on the shortage of eligible men at college to date, I think the story’s weird enough that it will get some internet play.

If you haven’t yet read it (it’s currently the most-emailed Times world news article) do yourself a favor and check it out immediately. The reporter, Norimitsu Onishi, gets several sources to posit on possible causes, including the general popularity of karaoke in the country, the large number of illegal guns and the simple swagger of the song. He also mentions that two years ago, “a Thai man killed eight of his neighbors in a rage after they sang John Denver’s ‘Take Me Home, Country Roads.'”

This is not the only fascinating article Mr. Onishi has written recently. Just yesterday, the Times published his article about the recent erection in Indonesia of a statue of Barack Obama, and the subsequent controversy surrounding it. The statue depicts the President as a ten-year-old boy “in shorts and a T-shirt, smiling as a butterfly lands on his left thumb.” On January 19, the Times ran his previous article, about four women in Indonesia who were arrested on New Years Eve for “sexy dancing.”

Clearly, Mr. Onishi has a great nose for stories about Asia that American readers will find weirdly compelling. A Japanese-born Canadian, Onishi edited the Princeton student newspaper and  reportedly joined the Times in December of 1993. In 2003, he became the Times’ Tokyo bureau chief, apparently the first one ever highly fluent in Japanese.  He has provoked his share of controversy covering the extremely long rule of the Japanese Liberal Democratic Party.  In 2006, he wrote an article called “Japan Rightists Fan Fury Over North Korea Abductions,” which caused some right-wing Japanese commentators to claim (probably scurrilously, not that it should matter) that his family is originally of Korean descent. This controversy has spread to his Wikipedia page, as well.

Mr. Onishi is a fantastic example of how the internet continues to feed off the content of some very, very talented journalists employed by newspapers.  I’m reminded of the Times‘ decision to have up-and-comer Sewell Chan report on the circumstances surrounding Heath Ledger’s death.  The tabloid magazines had maybe fifty reporters on that story, yet over the week Chan broke every single scoop.  It was like watching a shark amongst tuna.  Here’s to hoping the Times can afford to continue providing us with such wonderful articles for a long time to come.