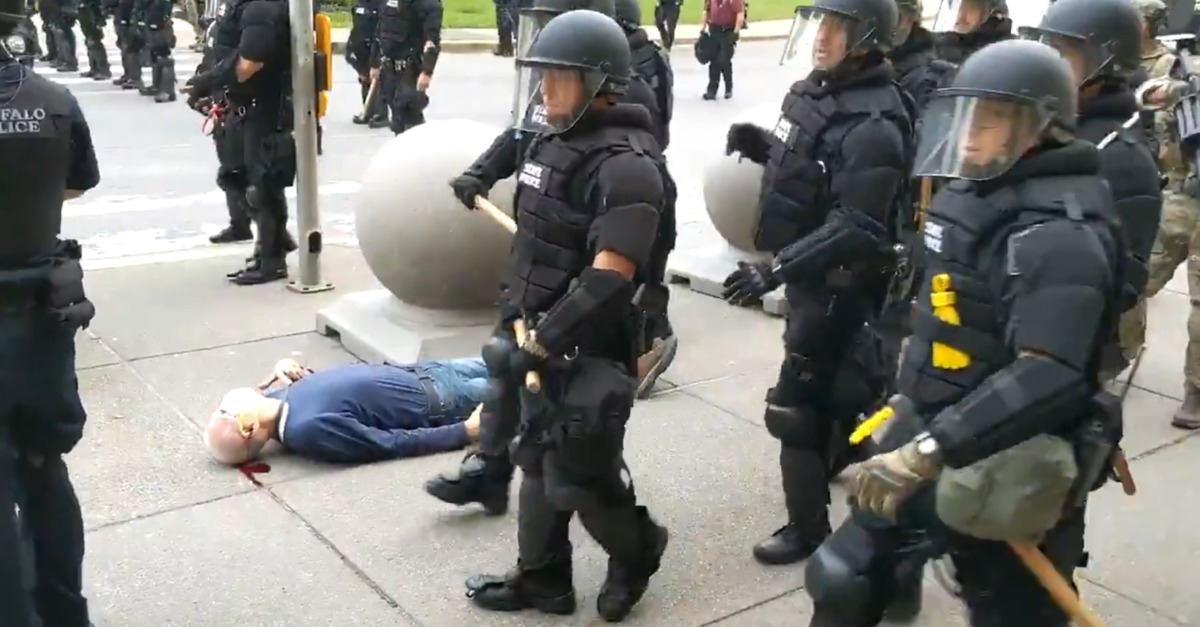 President Donald Trump advanced a conspiracy theory that the elderly man violently shoved to the ground by Buffalo police in a graphic viral video last week was an “ANTIFA agitator” who faked his fall after seeking to jam police equipment.

Two Buffalo police officers were charged with felony assault for shoving 75-year-old activist Martin Gugino to the ground outside City Hall, resulting in Gugino hitting his head and bleeding from his ear. The man remains hospitalized, in “serious but stable” condition, according to his lawyer.

According to the Washington Post, Gugino “is a member of two nonprofits: PUSH Buffalo, which focuses on affordable housing, and Western New York Peace Center, a human rights organization. He is also part of the Catholic Worker Movement.” Gugino also reportedly posted anti-police commentary on a Twitter account.

The theory that Gugino is an agitator seeking to scramble police communications first emerged from an obscure right wing blog. It was picked up by OAN, an aggressively pro-Trump network with a penchant for conspiracies. The OAN commentator who pushed the theory is reportedly also a Russian state media reporter.

After watching the OAN segment, Trump made a series of outlandish claims in a Tuesday morning tweet, including that the elderly man seen bleeding from the head in viral video faked his fall.

“Buffalo protester shoved by Police could be an ANTIFA provocateur. 75 year old Martin Gugino was pushed away after appearing to scan police communications in order to black out the equipment,” Trump wrote, tagging the network.

“I watched, he fell harder than was pushed. Was aiming scanner. Could be a set up?” Trump asked.

Buffalo protester shoved by Police could be an ANTIFA provocateur. 75 year old Martin Gugino was pushed away after appearing to scan police communications in order to black out the equipment. @OANN I watched, he fell harder than was pushed. Was aiming scanner. Could be a set up?

Here’s the first half of the batshit OANN segment Trump just tweeted. It alleges the 75 year old man assaulted by Buffalo police officers was an antifa operative, based on a report from Conservative Treehouse. pic.twitter.com/CeMVyJcoh8

UPDATE: Gugino’s lawyer responded to Trump’s tweet, asking “why the President of the United States would make such dark, dangerous, and untrue accusations against him.” Read more here.