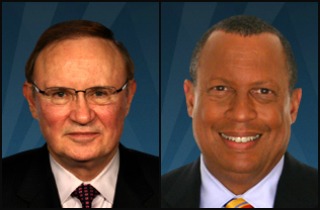 Fox News White House Correspondent Wendell Goler and Chief National Correspondent Jim Angle both retired this week, and somehow kept it all a secret from their Fox colleagues until their very last day with the network.

As first reported by TV Newser, Goler announced his retirement on Tuesday in a memo sent to his colleagues in New York and Washington, D.C.: “The time has come, to taste the joys of retirement. My thanks to Roger [Ailes] for giving me the opportunity to join this endeavor at the start. Thanks to Brit [Hume] for teaching me the power of words.”

Goler was so good at keeping it a secret, and Fox anchor Shepard Smith expressed his shock on the air as he welcomed Goler to the Fox News Deck one last time:

On Friday, Angle, another long-time Fox Newser and an Army veteran, announced his retirement, too.

“You are all a joy to work with and I will remember you and my time here fondly … I covered 4 Presidents and it was a thrill. I saw the Cold War come to an end, and the Berlin wall come down, which was particularly touching for me since I had given tours of it while stationed in Berlin in the Army,” Angle wrote in a memo first obtained by TV Newser.