A Decapitated Head Of George W. Bush Was Hidden In HBO’s Game Of Thrones (UPDATE) 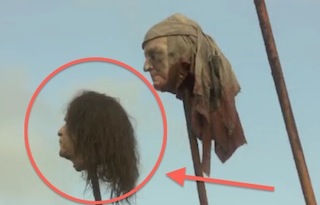 Anyone who’s watched HBO’s Game of Thrones or read the books by George R. R. Martin that the series is based on, knows that any character can die at any time. It doesn’t matter how major someone may seem to the plot, one well-placed slice of a broadsword and they’re gone. Well, apparently, the the safety of people with regards to the show is even less than we originally suspected. You don’t even need to be on the show to be decapitated. You could just be, I don’t know, the 43rd President of the United States! (UPDATED with HBO’s response below)

Yes, it looks like George W. Bush had a bit of a grisly fate in the kingdom of Westeros. Redditor SidIncognito brought his untimely demise to the Internet’s attention and the folks from over at io9 got the proof on the DVD commentary of the show’s first season. It would appear that, during the opening moments of the show’s 10th episode, one of the decapitated heads that Sophie Turner’s Sansa Stark is forced to look at was a model of the former President. It’s tilted away from the camera and covered in a ratty wig but, if you know, you can recognize the bottom half of Bush’s face.

Don’t worry, the people behind Game of Thrones aren’t plotting a violent assassination. As the series’ creators, David Benioff and D.B. Weiss, point out in the commentary, this was just another case of the incredibly costly show trying to save money:

“People may not have noticed this. They should back up. The last head on the left is George Bush.”

“George Bush’s head appears in a couple of beheading scenes.”

“It’s not a choice, it’s not a political statement. We just had to use whatever head we had around.”

Y’know, when you try to adapt a massively epic fantasy series on a TV budget, you have to cut some corners. Sometimes that means having characters be unconscious and sleep through giant battle scenes and sometimes it means killing a former president.

UPDATE: It might have simply been the cost-cutting measure of a frugal show, but this is, of course, an election year, and some poor folks in the HBO PR department must have realized this had the potential to be a “thing.” So, they put this statement up on their Facebook page:

?”We were deeply dismayed to see this and find it unacceptable, disrespectful and in very bad taste. We made this clear to the executive producers of the series who apologized immediately for this inadvertent careless mistake. We are sorry this happened and will have it removed from any future DVD production.”

You think this is bad? Wait till someone finally listens to the commentary tracks on the old Arli$$ DVDs and discovers that show was nothing but Nazi propaganda. Hoo boy!