Al Sharpton Delivers a Message to All His ‘Haters’ 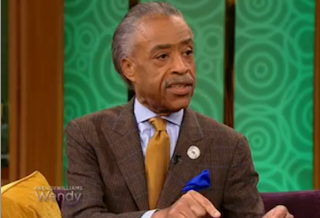 , and while he was there fired back at all of the “haters” who like to criticize his political agenda. He didn’t mention anyone specifically by name, but did challenge his opponents to match the social impact he’s had on the country.

Asked by Wendy Williams how he deals with the “haters” in his life, Sharpton called out his community’s tendency toward “loser complexes,” which lead people to think he can’t handle the “bigger stage” of MSNBC. “I don’t let losers decide how big and how successful I can be,” he said.

“I’ve been on television now two years,” he continued. “In those two years, I’ve led the Trayvon Martin fight, the voter-ID fight, the March on Washington anniversary, the jobs fight, stood by the president.” He said, “I ask all my haters, ‘Tell me what you’ve done—I’ve done all that and then some, all you’ve done is attack me.’”

Sharpton also discussed his campaign against the “n-word,” including the blow back he received from his friends “in the hip hop world.” He explained that “you can’t go in the studio and do lyrics against any other racial group or sexual group, so why us? So if you want to have free speech, do it against everybody. If you don’t, then don’t do it against anybody.”

Watch video below, via Fox 5: