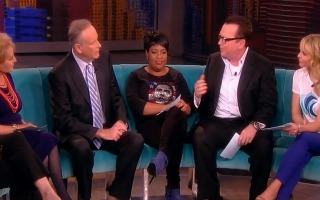 Actor Tom Arnold, guest co-host of ABC’s The View for ‘Guy Day Friday,’ battled Fox News Channel host Bill O’Reilly over some proposed gun control measures and just how necessary it was for residents of states which border Mexico to keep firearms in their homes. Arnold observed that he thinks people don’t need an “automatic weapon” to hunt, and finds people who do hunt with fully automatic firearms to be “morons.”

Walters asked O’Reilly what he thought of President Barack Obama’s executive actions aimed at curbing gun violence and his recommendation that the Congress pass a new assault weapons ban.

“I’m glad he’s trying to redefine the issue,” O’Reilly said. “He’s not going to get it through Congress.”

“I think it’ a state issue,” O’Reilly added. He said that New York’s preference for strict gun laws, passed this week, is different from the legislative needs and requirements of the states that border Mexico, for example.

“I’m from a rural area,” Arnold interjected. “I am a sportsman. I am a gun owner. And you don’t need some hot firepower like that – like that kind of firepower.”

“We’re not under siege,” Arnold added. “I know there’s a mentality that we’re under siege from Mexico, but we really aren’t.”

“Well then let the folks decide it,” O’Reilly shot back. “That’s democracy.”

“Then they can drive funny cars on the highway then. That’s why we don’t do it,” Arnold replied. “You have to have rules and regulations.”

“When I’m hunting and I see a guy with an automatic weapon out there, I think the guy is a moron,” Arnold concluded to the audience’s applause.