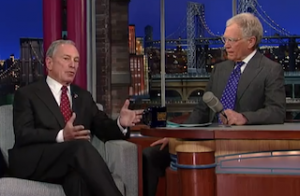 When New York City Mayor Mike Bloomberg scheduled his interview with David Letterman on tonight’s Late Show, he was likely looking forward to touting his administration’s new soda ban before it was to go into effect on Tuesday. But all that changed after a judge struck down the law earlier today, calling it “arbitrary and capricious.”

Instead, Bloomberg shared with Letterman his plan to appeal the decision and took the opportunity to promote his reasoning for putting the ban on 16+ ounce sugary drinks in the first place. The mayor quoted the stat that 70,000 Americans will die this from obesity, 5,000 of those deaths occurring in New York. He also noted that 2013 is set to be the first year that more people die from over-eating than under-eating.

During the interview, Bloomberg rejected the notion of the “nanny state,” so often attributed to his health department’s policies. Rather, he argued, “it is incumbent on government to tell people what they are doing to themselves and let people make their own decisions.” In the case of the soda ban, the goal was to “remind you that if you want 32 ounces, you would have to take two cups, so maybe you’d just take one.”

New York’s mayor even hinted at his infamous salt obsession when Letterman brought up potato chips. The New York Times caused a minor stir in 2009 by reporting that Bloomberg “likes his popcorn so salty that it burns others’ lips.” As was revealed in that article, Bloomberg had one request, for whoever might be watching out there: “Don’t ban Cheez-Its. Cheez-Its are OK. That’s my addiction.”