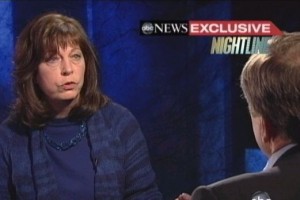 After The Drudge Report erupted into a four alarm fire frenzy the other night over ABC News’ report that Marianne Gingrich alleged her ex-husband Newt Gingrich wanted an “open marriage”, much anticipation was raised for Thursday night’s Nightline with Brian Ross to drop some earth-shattering revelations. CNN’s John King‘s mere mention of the report flung Thursday night’s debate into a holy mess. What juicy lurid details would emerge from this mightily-hyped segment? Secret affair videos? Explicit photographs?!

Sadly no! Despite heightened expectations for some Lewinsky-esque exclusive information, as it turns out, Nightline aired no real smoking gun. The centerpiece of the report — the “open marriage” money quote — was leaked many hours earlier. It should be pointed out that Ross earlier tried to play down anticipation on The View, saying “I don’t really think it’s as much of a bombshell as some think it’s going to be,” adding that Marianne Gingrich had spoken in “measured tones.”

Even still, politicos were sorely disappointed. “I kinda feel ripped off by that Nightline interview, Al Capone’s Vault now has competition for biggest “no ‘there’ there” TV moment. #Fail” tweeted Daily Caller‘s Derek Hunter.

“Doesn’t feel to me like there was enough new material in the Nightline interview to reverse Gingrich’s momentum,” added The New York Times‘s Nate Silver.

Watch the report via ABC News below: