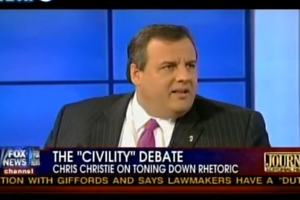 The most boisterous governor in America is not taking the Tucson massacre as a cue to tone down the rhetoric. New Jersey Governor Chris Christie sat down with Paul Gigot of Fox News’ Journal Editorial Report today to give his take on the events in Arizona last week, and while he sees a need to constantly reflect on the tone of political language, he sees no reason to connect that need to acts of an independently “deeply disturbed young man.”

Christie, who has become one of the most popular Republican figures in the nation in part due to his “no-nonsense” approach to talking to the press, didn’t show any inclination that he was going to make an effort to soften the figurative punches in light of the national discussion on civility in politics, because he doesn’t see a need for it. Tucson shooter Jared Loughner, he told Gigot, was “deeply disturbed,” and acted the way he did out of his own madness. That does not mean, he continued, that the conversation on civility is out of place. “We should always be examining how we speak to each other,” he noted, but “if speaking to each other civilly means not telling the truth, and putting so much varnish on what we say that you can’t tell where people really stand, I’m not in favor of that.”

Gigot then asked directly whether the events made him reflect or pause on his own manner of speaking, to which Christie shook his head and argued that, as his talk was “all substance,” it was not out of line. “I don’t think disagreeing with someone is hateful unless you make it so,” he concluded, expressing a hope that people will speak truthfully to each other regardless.

Having Christie answer questions about civility in an atmosphere where suddenly a lack of tact may be considered literally lethal is perhaps one of the most interesting positions the media has been able to see Christie in during his short career as a conservative media darling. He was soft-spoken and clear, and, in some ways, departed from the head-on combative style that has made him a YouTube goldmine. For someone who refuses to tone down his rhetoric, he certainly sounded much more soothing that he’s gotten the media used to.