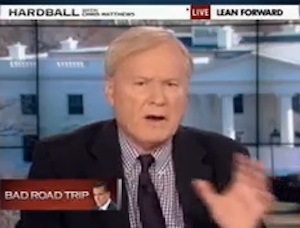 On the heels of Republican hopeful Mitt Romney‘s 3rd place finishes in both Alabama and Mississippi, Chris Matthews lambasted the former Massachusetts governor as being “too remote, too inauthentic, too phony for people to accept him as their own.”

“He’s not a backslapping urban politician, you know, who can go down there and pull off the y’alls and the cheese grits,” Schmidt observed. “He’s a serious man with a record of accomplishment and he particularly has a record of accomplishment in making broken things work right and I think being able to communicate that through the prism of this is how it benefits you, the voter, in a primary context and then ultimately in a general election context, you know, convincing people he has the core competence to restore prosperity to the country.”

“It sounds colonial!” Matthews exclaimed. “Like, I’m not one of you people, but I can come in and run your country better than you can! I know I’m not one of you, but I’m really good at this business sense. You know! Colonial! That was the colonial argument by the way in Africa. We’re going to come in. We may not belong here. We’re not one of you but we got this economic sense. We know how to run businesses better. I’m sorry, these metaphors never work!”

Watch Matthews’ compare Romney to an African colonialist below via MSNBC: