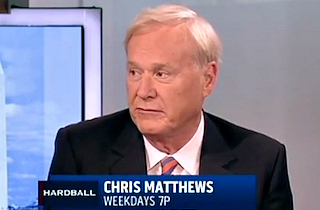 MSNBC’s Chris Matthews joked on Morning Joe Wednesday morning that Hitler “loved” Mr. Smith Goes to Washington, a possible play on Ted Cruz’s (R-TX) comparison at the start of his “filibuster” Tuesday afternoon of the acceptance ObamaCare as fait accompli to Neville Chamberlain’s appeasement of Adolf Hitler’s aggression in 1938.

Later, Matthews chose a different historical analogue, arguing that Cruz’s success in gaining momentum against ObamaCare was an iteration of one of Machiavelli’s principles.

RELATED: Chris Matthews Rants Over Ted Cruz: This ‘Sneering’ Demagogue is a ‘Problem for Our Republic’

“This is from Chapter 6 of The Prince,” Matthews said, and then Pulled A Cruz and read a book on-air:

“‘We must keep in mind that there is nothing more difficult and dangerous or more doubtful of success than an attempt to introduce a new order of things in any state. For the innovator has for enemies, all those who derived advantages from the old order of things, while those who expect to benefit by the new institutions will be but lukewarm defenders. This indifference arises in part from fear of their adversaries who are favored in the existing laws, and partly from the incredulity of men who have no faith in anything new that is not the result of well established experience.'”

“So nobody really thinks, ‘I love this new health care bill, oh my god, the health care bill!’ So this guy is brilliantly playing on this leverage from Machiavelli. Maybe he didn’t read it. But it’s implicit.”

“Hold on a second,” host Joe Scarborough said. “Of course he read it. Because he didn’t go to a lesser Ivy. He went to Harvard, Princeton, and those are the only people he’s studied with.”