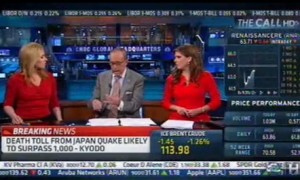 Human beings are strange, unique creatures whose reactions to tragedy can be unpredictable.The same can also be said of CNBC host Larry Kudlow, who waxed optimistic about the catastrophic earthquake/tsunami in Japan on Friday’s edition of The Call. Even as horrific scenes of devastation unfolded in the aftermath of Japan’s 8.9 earthquake and 23-foot tsunami, Kudlow found the silver lining: no markets were harmed in the making of this disaster.

After one of his colleagues made the somewhat cold observation that “the markets are taking this in stride,” Kudlow chimed in, “The human toll here looks to be much worse than the economic toll, and we can be grateful for that.”

Here’s the clip, from CNBC. Kudlow’s declaration is about 20 seconds in, but we let it run a little longer to see if he would, um, clarify?

It must be a rule that in order to be hired by CNBC, you have to be more made of asshole than a pack of Dollar Store hot dogs. You might remember that it was CNBC’s Rick Santelli who first put the Tea Party on the national radar by ranting, to the approving jeers of a crowd of stockbrokers, about how the real villain in the financial meltdown was your loser neighbor and his extra bathroom.

But Kudlow really outdid the prior holder of the HAL 9000 F**cked Up Priorities Award, CNBC’s Erin Burnett, who once warned Americans who wanted China to stop poisoning our food and toys to be careful what they wished for. No, I’m not kidding.

These are the people who shill for the investor class who crashed our economy, and you should all remember this the next time they cry “class warfare” at the prospect of a 3% tax hike. That’s a bit like spiders crying “Parlor warfare!” whenever the flies get a little bit mouthy. 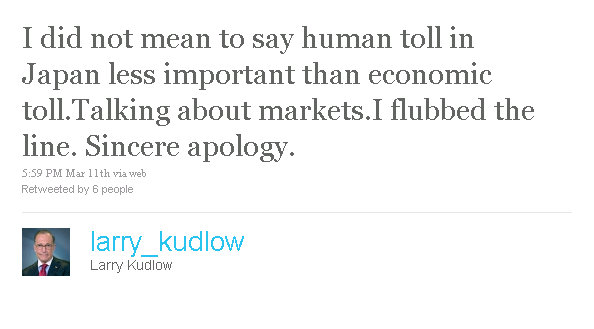