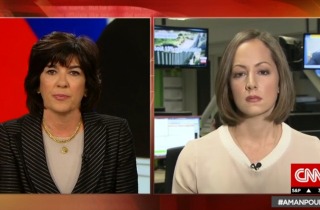 Russia’s state-funded cable news channel is taking aim at CNN for inviting an RT host to discuss Kremlin politics but editing out her fierce criticisms of the American cable outlet.

In the Know host Anissa Naouai appeared last week on Christiane Amanpour‘s CNN International nightly talk show to defend her network against accusations that it is part of Russian President Vladimir Putin‘s “propaganda war.” The conversation apparently took a drastic turn for the worse when the guest went after the host’s personal connections to the U.S. Department of State.

Ultimately, Amanpour told Naouai, the most contentious bits were unworthy of airtime and would certainly be edited out. In response to the edits, RT posted video of its half of Naouai’s satellite feed, showing her answers that were omitted from the final product. CNN posted the full transcript to its website in the interest of transparency; RT did the same.

To be clear: News outlets routinely edit pre-taped interviews — normally for timing purposes, but also to cut down on redundancies or rambling questions/answers — and so this is not at all an ethical scandal. As a pre-taped show, Amanpour makes its guests aware that they will be edited down for time. This particular interview, as you’ll see in a moment, happened to go very long.

But considering edits are a common practice in the news business, this story provides a fascinating glimpse into how and why words get left on the cutting room floor.

And when you compare the unedited clips to what actually aired on CNN, you’ll notice RT is correct about one thing: Most of Naouai’s direct criticism of the American network and its host were edited out for broadcast. At one point in the unedited transcript, Amanpour herself makes clear to Naouai that the personal attacks render some of the footage unusable for TV.

The first tense moment removed entirely from broadcast occurred when Amanpour suggested to the other guest, anti-Putin politician Mikhail Kasyanov, that Naouai admitted RT perhaps exaggerates the threat of neo-Nazism in Ukraine:

AMANPOUR: Is it more than exaggeration? And as such, is it a fair interpretation of what’s going on and what are the consequences?

AMANPOUR: No, you didn’t say that. You said they may – that might be an exaggeration, but then who are we to say that fears are exaggerated? I’ve got that on record. So don’t worry about it. That’s going to be played.

NAOUAI: Yes, I didn’t admit that it was an exaggeration.

AMANPOUR: All right. But you actually did and I’ll play it and you can dispute it afterwards if you like. But I will play it and it’s not a problem. It’s what you said.

Later in the interview, Amanpour asked Nauouai about another Russian channel’s error in covering the Malaysia Airlines Flight 17 tragedy. The entire passage was edited out, but you can sense the conversation getting more strained as the RT host began to rattle off examples of CNN’s own errors:

NAOUAI: I have to point out that I don’t represent the Russian media, but RT. I know the image you’re talking about, of course. It should be pointed out also that that image was on the Internet for quite a couple of months – unfortunately this channel took the bait. They didn’t verify it. We did, of course. That’s why we didn’t show it. But to sort of condemn the First Channel for mistakes that we’ve all make –- and I remember very well Jim Clancy of CNN showing a video in Donetsk in May of this year of a supposed helicopter being downed by these anti-Kiev fighters. We went online; we checked the video. The video was from Syria. We never even saw a retraction from CNN. So it’s a little difficult to judge…

And the discussion truly went off the rails when Naouai brazenly accused Amanpour of bring a state propagandist herself. Check out this bitingly personal exchange below, from right after the host asked Naouai if it’s “healthy” for Russian audiences to get only one view from RT. It gets ugly:

NAOUAI: …[I]t’s an absurd question coming from someone that’s propagated the line of the State Department for over 15 years. I mean, it’s absolutely absurd.

AMANPOUR: Well, are you talking to me?

NAOUAI: Yes. Absolutely I’m talking to you. Who else would I be talking to?

AMANPOUR: Are you talking to me?

AMANPOUR: You’ve got to be kidding me.

NAOUAI: You’ve propagated the line of the State Department for over 15 years, starting with Yugoslavia and all the way into Syria. And now you’re doing it for Ukraine, essentially. Absolutely, I’m talking to you.

Again, this was all removed from brodcast. According to transcripts, Amanpour began scolding her guest for not having an “adult discussion,” but Naouai simply responded that she’d like for CNN’s audience to be made aware of their host’s background. And that’s when the RT host invoked Amanpour’s husband, former State Department official James Rubin:

AMANPOUR: They are aware of [my past work], which is why they’ve been watching me for a long time. But listen to me, I would like you seriously…

AMANPOUR: …as an act of research and as an act of education, go back and find all my work on Yugoslavia and all my work on Syria and match that with the policy of the United States government and furthermore, go back and watch what launched me and that was a to-and-fro with President Clinton challenging his policy on Bosnia and Yugoslavia. So Anissa, listen, I have respected you but I really don’t think that you should be doing this to me, of all people, on this – on this broadcast and on this satellite link. And you’re wrong. And I challenge you to go back…

NAOUAI: Yes, how dare someone tell CNN to check who their sponsors are, what governments they are working with!

NAOUAI: How dare someone come on CNN and say that!

AMANPOUR: No! Hey, excuse me, no, no, no, you just said whatever you wanted to say. When you become ad hominem to me, that’s a problem, because you’re not doing it from a basis of knowledge.

NAOUAI: Well, let your viewers decide, Christiane. I think that’s the fairest way out of this debate.

Amanpour insisted that Naouai watch her antagonistic 1994 interview with then-President Clinton before making such assertions, and informed her guest: “You can be sure I’m not putting this on the air, Anissa. It’s a personal attack.”

Naouai said she is familiar with the interview and accused Amanpour of agitating for war in Kosovo. The CNN host finally ended it on this note, including an acknowledgement of the fact that she’ll have to provide a polite goodbye for the edited version of the interview:

Watch the edited interview as it aired on CNN below:

And watch the full video of Naouai’s answers, via RT’s outgoing feed:

And the full transcript, via CNN and RT:

[UPDATE — 4:10 p.m.: This post was updated to include the fact that CNN also posted the full transcript.]