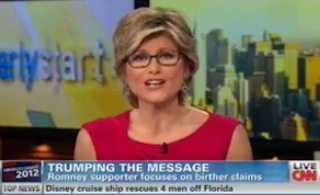 On CNN’s Early Start Wednesday morning, Ashleigh Banfield spoke with The Situation Room‘s Wolf Blitzer about his contentious interview with Donald Trump. “Why is Donald Trump doing this,” she asked him, “doubling down, as you put it, especially on a day when his own candidate is possibly not going to weather it well?”

“I’ve known Donald Trump for a long time and interviewed him on many, many occasions,” said Blitzer. “He’s an intelligent guy, not a stupid guy or anything like that. I assume maybe it’s an obvious reason. He believes it. He believes that there are a lot of questions out there. He’s read a lot of the conspiratorial theories and believes what he’s saying.”

“Do you really think that?” Banfield pressed. “Because I heard you questioning him over and over about the number of times he brought up the issue that ‘many people believe this.’ In fact, we had our producers count the number of times he said ‘many people’. It was 18 times in your interview, Wolf, that Donald Trump said ‘many people believe this’, and I know you took him to task and said ‘Who, what people of record?’ And he said, ‘I don’t give names.'”

“I was surprised. If he’s going to back it up, he has to have evidence,” said Blitzer. “And you currently point out that Linda Lingle was the Republican governor when she authenticated the birth certificate. Now there’s a Democratic governor who has authenticated the birth certificate. The individual in charge of the department is Republican and authenticated the live birth certificate. Mitt Romney disagrees with him, Newt Gingrich disagrees with him, all the other Republican presidential candidates basically disagree with him. They accept the fact that Barack Obama was born in Hawaii back in 1961. Even Karl Rove, the head of the largest pro-Republican Super PAC out there, he disagrees. So it’s not controversial. I don’t understand why he continues — as I say — to double down and now sort of all in, as a casino metaphor.”

“And that’s what I wonder, if he’s so all in and can’t get out,” Banfield observed. “I heard you confront him and show him two different birth announcements in newspapers in Honolulu in 1961 and his retort was “many people used to do that,” put birth announcements to try to somehow suggest they were citizens of the United States. I gotta ask you this, I have never heard any reporting of that trend. Have you ever heard of that kind of a trend and did you get a response when you asked Donald what his facts were to back up that claim?”

Later on in the segment, Bainfield summed up her thoughts regarding this story. “I think Donald Trump has jumped the shark, I got to be honest with you,” she said bluntly, and commended ‘Blitz’ for his journalism.

Banfield then segued into a supercut of some of Blitzer’s most contentious interviews with ideologically diverse figures. “If you’re wondering if that’s a one-sided interview because Wolf Blitzer and Ashleigh Banfield are raving Democrats who don’t support Donald’s…forget about it.”

Watch Banfield’s interview with Blitzer below via CNN: