CNN’s Carol Costello Has a Problem with ‘Sexy’ Jesus 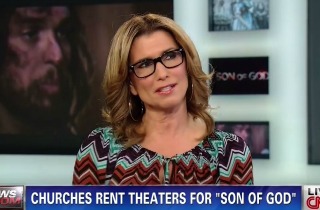 CNN anchor Carol Costello reported on Thursday that the film Son of God is attracting a lot of attention ahead of its nationwide release. She took issue with the actor who portrays Jesus in the film, noting that he is too “sexy” for her tastes. A CNN chyron observed that critics contend there is no historical indication that Jesus was “handsome.”

“Son of God is also generating a lot of heat because Jesus is, um, so sexy,” Costello noted. The CNN anchor wrote an opinion piece for CNN.com in which she asks why “Hot Jesus” must be portrayed by a “sexy” actor:

I’m not the only one gawking at [Diogo] Morgodo‘s Jesus. He inspired the hashtag, “#HotJesus”. It went viral on Twitter. The actor told The New York Times he doesn’t want his looks to distract from the movie, but, “If the message of Jesus was love, hope and compassion, and I can bring that to more people by being a more appealing Jesus, I am happy with that.”

Clearly we have a new trend. A “more appealing” Jesus is not just a better prophet, he’s … sexy.

“Must Jesus be sexy, too?” She asked.

“Through the years, Jesus has morphed from good looking to great looking to sexy,” the CNN anchor asked her priest guest. “Why is that?”

“I think it’s a natural trend,” Rev. James Martin replied. “We tend to like to look at pretty people on the screen.”

Both Martin and Costello noted that there is no indication that Jesus was as attractive as the actor who played him in Son of God.