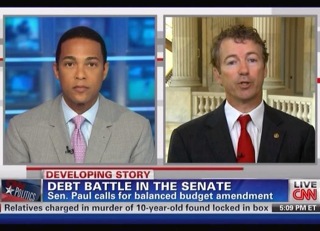 After proposing a balanced budget amendment to the Reid bill and having it struck down, Sen. Rand Paul sat down with Don Lemon to explain what was happening on the floor and what compromises he was up for making. Lemon was in a curt mood, it seems, as weeks have gone by and the debt deadline looms with little to no visible progress occurring. The two had a contentious exchange as Sen. Paul tried to explain he did have the will to compromise when Lemon questioned what it would take.

“Let’s just do the interview without talking points– let’s just talk to each other,” Lemon began, though followed up with a barbed question: “Democrats and Republicans are both pointing fingers at you. What will make you and the Tea Party happy?” Sen. Paul immediately made a correction to his introduction: “In your lead, you said I rejected both plans. I actually accepted both plans… with an amendment.” Sen. Paul had proposed a balanced budget amendment which gained no traction in exchange for his vote. “I think that’s a very reasonable position,” he offered.

The launched an uncomfortable back and forth in which Lemon repeated asked how he had voted on the House bill, until Lemon moved on, with another tough question– whether Sen. Paul worried that voting against the bill would be “overreaching” that would make him “lose respect and clout.” At this point the conversation gets heated enough that Lemon has to remind the senator to “please be respectful here,” while an indignant Sen. Paul later argued that “there is no reason to default” and that the President “should have taken default off the table” rather than promote it. Either way, “we have plenty of tax revenue to pay the interest on our debt.”

“You know know,” Lemon interrupted, “that the public is really frustrated now and they don’t really know what’s going on.” He asked Rep. Paul whether he “felt” that the people were upset. Lemon cut him off at the beginning of his answer, to which Sen. Paul shouted “you keep interrupting the middle of my answer!” Eventually, the Senator told Lemon that “I think we’re having trouble understanding each other,” with the interview ending on a note of agreement: both sides want to see a solution, fast.