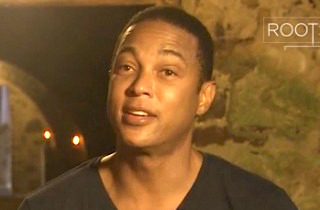 As part of the new CNN series Roots, Don Lemon traced his ancestry in a pretty emotional segment where he and his mother traveled to Louisiana and the slave coast. They started out in the South, where Lemon and his mom learned about how his great-grandparents––a white man and a black woman––worked at a Louisiana plantation.

Lemon even got a DNA test to get a clear picture of his origins, and found that a lot of his roots are from Nigeria, Cameroon, and the Congo. And it’s this part of the story that got much heavier, emotionally speaking, as Lemon and his mother followed the same route slaves did all those years ago. And as he put it, “The only escape was either [to] become a slave, go to a new world, or you escape through death.”

As he learned more and more about what his ancestors went through, Lemon teared up as he thought about how lucky he is to not just be alive, but to have a good life. And when they cut back to the CNN table, Lemon and his mother got teary-eyed again as they thought back on their ancestry.

You can watch both videos here, via CNN: