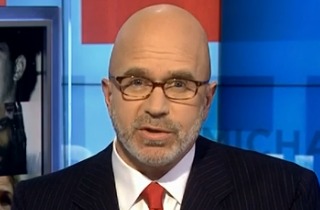 Mumia Abu-Jamal was convicted for murdering police officer Daniel Faulkner in 1981, and there’s plenty of outrage this week over one Vermont college’s decision to invite him to be their commencement speaker. And CNN host Michael Smerconish really went off this morning on the college and the “ignorant” people who believe he’s innocent.

Abu-Jamal is serving out a term of life imprisonment, so he won’t actually be appearing in-person at Goddard College on Sunday; it’ll be a recorded message. Outrage has poured in from conservative media outlets, as well as one U.S. senator and the Vermont Police Chiefs Association.

Smerconish was particularly bothered by this invitation, seeing as how he wrote a book a few years ago with Maureen Faulkner, the widow of the man killed by Abu-Jamal. He recounted the details of the murder and how Abu-Jamal’s multiple appeals of the death penalty that “made a mockery of the judicial system.”

Smerconish went after the celebrities and fringe people who continue to believe Abu-Jamal is innocent. He brought up the last time a college embraced him and expressed his disgust with Goddard:

“What I recall most from that experience 14 years ago, was concluding that the students desperately wanted attention. They loved the media spectacle their invitation generated.

“Which is why now, I will not identify the Vermont college that on Sunday, will disrespect the police officer murdered in the line of duty. It’s bad enough that for 32 years, Abu-Jamal has succeeded in making it all about him.”