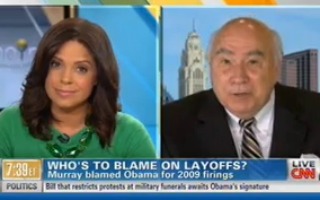 On Friday’s Starting Point, host Soledad O’Brien spoke with Robert E. Murray, founder and CEO of the Murray Energy Corporation, of which Ohio American Energy is a subsidiary. The two became embroiled in a disagreement over whether Murray’s problems with Obama and his energy policies are politically motivated.

“This morning we’re taking a closer look at coal,” said O’Brien, introducing the segment. “An Ohio mining company now shutting down its operations — that will happen in the fall — laying off all its workers. They say it’s the President’s fault.” At its peak, 239 people worked at the company’s mine near Brilliant, Ohio, she explained. That number has since dropped to 56 employees, with 32 told they will have to be transferred within the company. “Overall the coal industry has been suffering lately, she continued. “In 2011, the United States used 124 million fewer tons of coal than four years earlier and its competition, natural gas, has become lots cheaper to use.”

Later in the segment, Murray told O’Brien that politics didn’t play a factor in his remark that Obama had a role in the mine’s demise.

“Let me say one thing, ma’am,” he began. “The PJM Interconnection is a group of 13 Ohio electric utilities east of the Mississippi. They just had their quarterly auction, electric power prices are up 800 times, 8 percent, the utilities themselves bid that incremental power up eight times, 800 percent because they in their press release said there’s going to be brown-outs and blackouts. As Barack Obama eliminates the four cent kilowatt hour electricity in America made from coal and tries to substitute his 22 cent a kilowatt hour. Wind and solar power that gets $24 a kilowatt a dollar from the taxpayer on top of that it’s artificial. It shouldn’t exist. Ma’am, this is a national crisis — goes well beyond the coal industry.”

“You’re clearly infuriated by it,” said OBrien. “You know, I want to ask you about the politics of this. Because when people look into who you support politically, this year alone — right, and we’re only in August — I believe you’ve given $150,000 to the GOP. You know, so I think there are people who could say, your position is more about politics than anything else.”

“You’re insinuation is incorrect,” Murray responded. “I told you this was a human issue. These are my employees. I care for them deeply. Barack Obama and his Democrat followers are destroying the entire [unclear] of America.The whole country had better wake up to what’s going to happen to electric power costs. Ma’am, it has nothing to do with politics. In the Eastern Ohio where these jobs are limited, it doesn’t make any difference whether you’re a Democrat or Republican. Everybody there wants jobs and he’s destroying them.”

“Let me read a quote from you,” said O’Brien. “You said, “God was shining on America when Bush got elected,'” adding that policies relating to his industry do indeed politicize the issue.

I’m an American and China is building a new 500 megawatt coal fired plant every week and have for years as he shut down 175 plants. Ma’am, that’s 83,000 megawatts. I’m not a politician. I’m an engineer. America had better wake up to what this man is doing because people on fixed incomes will not be able to pay their electric bills. Every job in America that depends on low cost electricity is going to be exported to China. This is a national issue and this — I know exactly what this man is doing and it has nothing to do with politics. He is bad for America.