Concha: Here’s Why Baseball Is Struggling as a National TV Sport

Concha: Here’s Why Baseball Is Struggling as a National TV Sport 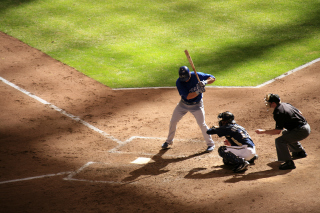 It may be hard for anyone reading this born after 1985 to believe, but there was once a time baseball was the most popular sport in the land…even on television.

But it’s no longer morning in America, and baseball is no longer our national pastime. Not even close. Here’s one two glaring numbers to chew on:

Through five games (Game 6 ratings aren’t available yet), this year’s World Series–which has been a back-and-forth affair featuring a major media market with a team that has won two championships in the past four years in the form of the San Francisco Giants–is averaging 12.5 million viewers per game on Fox. Meanwhile, last Thursday night’s somewhat-compelling NFL matchup (Chargers at Broncos) on CBS pulled in 20.2 million.

The numbers get particularly depressing (if you’re a baseball purist like me, anyway) when compared to the ratings for the last time the scrappy Royals of Kansas City played on the sport’s biggest stage: In 1985, the Show-Me-Series featuring two Missouri teams (Cardinals-Royals) averaged 34.5 million viewers…or almost three times as much as what we’re seeing today.

For fun, here’s how baseball is stacking up to some of your favorite and not-so-favorite sports and regular programming:

– 17.3 million watched The Walking Dead premiere earlier this month on AMC (or about five million more than the Fall Classic)

– 25.4 million watched the U.S. World Cup game against Portugal in June on ESPN

– 15.5 million on average watched the NBA Finals in June on ABC

– One million on average watch John Oliver’s first-run episode of HBO’s Last Week Tonight (impressive considering it’s on a pay channel and is on at the unforgiving time of 11:00 PM Sundays)

– 1.61 million watched the season premiere of Homeland on Showtime

– 632,000 watched the first-run of the season-finale (but unfortunately not series-finale) of HBO’s Girls

That’s not to say baseball is dying. The sport is on track to pull in $9 billion in revenue this season (according to Forbes, in 1995, MLB revenues were $1.4 billion, or only just over $2.2 billion when accounting for inflation). And thanks to everyone either having a classic or somewhat new or newly classic ballpark (except for the poor A’s and Rays), fans are still taking themselves out to the ball game, with nearly 75 million turning the turnstiles this season (virtually unchanged from 2013). Local broadcasts are moneymakers for rights-holders even teams like the aforementioned Rays (near the bottom in attendance but a surprising 12th in local TV ratings). Some teams–like the Yankees here in the New York area–even have their very own 24/7 networks.

But nationally, baseball is much like hockey. Passionate fans in each city do go to games and watch at home, yes…but are mostly apathetic when their team isn’t playing on the national stage. For example, this year’s Game 5 saw a 64 share in Kansas City. In San Francisco, it generated a 58. Nationally, it did just a 12.

So why does football do so much better ratings-wise? The short answer is gambling in all forms: Online wagering or the local bookie by phone (if gambling was legal, of course); fantasy football (30 million players and counting, including eight million women); office pools, survivor pools…the financial interest alone would force more people to watch the 3-4-1 Panthers host the 3-4 Saints Thursday night than a Game 7 of the World Series tonight if not for the game being on the NFL Network.

The longer answer is baseball has become way too slow to absorb for an entire game for a casual fan. Last night’s Game 6, which was 8-0 KC by the end of the second inning en route to a 10-zip final, still somehow took nearly three-and-a-half hours to complete. How much has the average time to finish a game changed since 1950? Baseball Prospectus’ database says this much:

Finally, there are obviously many more options available since that gaudy 34.5 million number was put in 1985. Smartphones are endless entertainment, social media, 500 channels to choose from…it’s simply a matter of over-saturation.

So enjoy Game 7 tonight. Past history says the Royals win it (the last nine home teams have won Game 7s going back to 1982). Either way, for the first time in a long time, baseball will dominate the national stage once again…even if it’s just for one night.