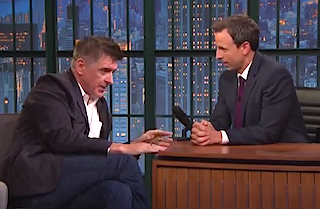 Late night worlds collided last night when Craig Ferguson, whose Late Late Show on CBS aired at the same time as Seth Meyers’ Late Night, appeared on that NBC show to offer up some advice on what it takes to be a great host.

Since Ferguson is known for conducting interviews without any notes or predetermined questions, Meyers dramatically tore up his note cards. “Let’s dismantle the whole thing right now,” Ferguson said, appreciating the gesture.

“I feel very old,” Ferguson, who is leaving his show in few months after 10 years on the air, told Meyers. While the Meyers and his audience are “young and beautiful,” Ferguson said he felt like a “hideous troll.”

Ferguson told Meyers that hosting a late night show every night for years on end “will get to you,” but said, “you’ve just got to stay with it. When they ring the little bell, you come out here and you dance for nickels, and that’s all you do.”

To drive his point home, Ferguson paraphrased comedian Garry Shandling, saying, “‘There’s only one thing crazier than being on TV everyday and that’s wanting to be on TV every day.’ So, welcome aboard.”