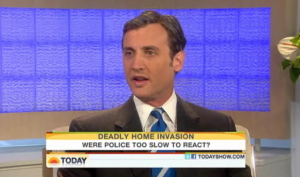 The trial of, Steven J. Hayes, one of the suspects in the Petit Family killings, began this week and his defense attorney, Thomas J. Ullmann, has attempted an unusual tactic. While he didn’t deny his client’s involvement in the gruesome torture and murder of a Connecticut family (he did however blame the other suspect, Joshua Komisarjevsky, for turning the planned robbery violent), Ullmann blamed the police for not stopping the two men from killing the family. This morning on Today, NBC’s Chief Legal Analyst and Mediaite founder Dan Abrams claimed this was a sign that Ullman “knows he has almost no case.”

During the segment, Today delved into the police’s culpability in the case. Before Jennifer Hawke-Petit was murdered along with her two daughters, she was sent by the intruders to the bank to withdrawal $15,000. While there she alerted the teller who then called the police (Today played the harrowing 911 call). The police were outside the house for around a half an hour before the murders but did not go in. While this may have been compliant with their training, Abrams discussed the possibility that their training was inadequate and may have to be changed in the future.

He and Meredith Vieira also talked about whether the suspects, if found guilty, would receive the death penalty. Abrams pointed to the fact that Dr. William Petit, the sole survivor of the invasion, has pushed so hard for capital punishment as an important factor in whether or not the prosecution would as well.