Dan Rather to Pundits Calling for War: Send Your Own Kids or ‘Don’t Even Talk to Me’
VIDEO

Dan Rather to Pundits Calling for War: Send Your Own Kids or ‘Don’t Even Talk to Me’ 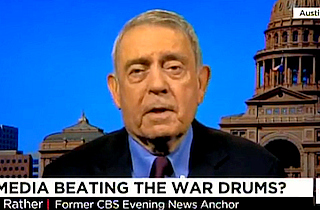 Veteran journalist Dan Rather told Reliable Sources host Brian Stelter that the scores of pundits calling for action in Iraq, Syria, and elsewhere were reminiscent of the buildup to the 2003 Iraq War, which Rather called a blunder of “historic proportions,” and that hawks needed to be prepared to send their own kids to battle before they so cavalierly recommend it for others.

“My first question to anyone who’s on television saying ‘We have to get tough, we have to put boots on the ground, we have to go to war in one of these places’ is: I will hear you out if you tell me you are prepared to send your son, your daughter, your grandson, your granddaughter to that war for which you are beating the drums. If you aren’t I have no patience with you, and don’t even talk to me.”

Rather also called upon the press corps to more forcefully prosecute the case against military action as expiation for the Beltway media’s complicity in the last Iraq War:

“Those of us in journalism, and I include myself in this, we have a lot to answer for about what we did do and what we didn’t do in the run up to the war in Iraq. We didn’t ask the right questions, we didn’t ask enough questions, we didn’t ask the followup questions. We did not challenge power. I am concerned that once again as the war drums begin to beat and get louder and louder that there will be a herd mentality of saying, ‘Well, we have to go to war in Syria, we have to go to war in Ukraine.’ I don’t think it’s an overstatement to say that we need to be thinking very very carefully and seriously about this, and journalists have a special responsibility to at least ask the right questions.”