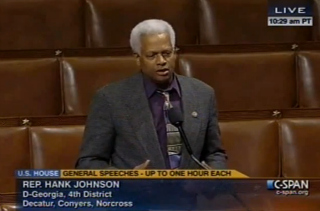 In a somewhat verbose apology speech on the House floor this afternoon, the Georgia-based congressman apologized for rhetorically asking yesterday: “What happens when you put a giant with a midget in a cage fight?” He was using the “m-word” to describe how unfair a fight he felt the Michigan unions faced against the forces in favor of a “right-to-work” state.

“Last night I used an analogy that some find offensive. And I certainly was not meaning to be offensive or use a derogatory term,” the congressman began, before likening the word “midget” to another pejorative word: “You know, everybody knows what the ‘n-word’ is … We don’t say the ‘n-word,’ we refer to that word as the ‘n-word.’ I had never heard of the ‘m-word.'”

Johnson went on to explain how he recently learned about the hurtful past behind the m-word: “It was at one time socially acceptable. But to my discovery, just within the last 12 hours or so, I have found that the use of the of the ‘m-word is no longer socially acceptable. Now, the ‘m-word’ refers to a group of people, the little people.”

What does he mean by “little people”? Well, he explained in sort of rambly fashion:

He then delivered the actual apology: “I wanted to say to all of those who may have been offended by my use of the term the ‘m-word,’ I want you to know that it was out of ignorance and not spite or hatred that I used that term and please know that I will never use that term again.”

Rep. Jan Schakowsky (D-IL) agreed, adding that “we should all learn what to say so as not to offend people.”

“It’s a learning moment for me and perhaps many others out there,” Johnson concurred, before adding that he has “been awakened to the sensitivities involved and so anyone who I offended has my deepest apology.”

“But,” he concluded, “the analogy that I used — even though it used the wrong wording, it was a great analogy in my personal opinion.”

Watch below, via CSPAN: