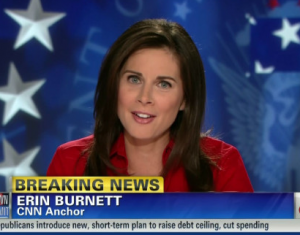 The former CNBC anchor Erin Burnett made her debut on CNN last night, appearing with Wolf Blitzer in the hour leading up to President Obama‘s speech to the nation on the debt ceiling impasse. After a welcome to “CNN’s newest anchor” (Burnett’s as yet untitled show will premiere in the 7 p.m. timeslot in September), Burnett got right down to breaking some news. Asked about the differences between plans advanced by Democrats and Republicans, Burnett said “in the short term, either deal probably will be enough, although really interesting this afternoon, Wolf, when I was talking to an investor who had met with the ratings agency Standard & Poor’s, talking about the potential of a downgrade– which, by the way, could raise interest rates, just the same way a potential default could–and they said the Boehner plan probably wouldn’t hit the hurdle to prevent a downgrade.”

Burnett also used her recently-launched Twitter account (@ErinBurnettCNN) to tweet the exclusive, and it was quickly re-tweeted by more than a hundred people–leading CNN to bring Burnett back on to talk about it. “Erin, earlier this hour we spoke and you said something that got a lot of buzz out there on Twitter, some of the other social networking sites,” said Blitzer. “You suggested that one investor who was actually briefed by some of the ratings agencies like Standard & Poor’s suggested that if Speaker Boehner’s plan is approved, it might still result in some sort of ratings reduction for the United States. Whereas if Harry Reid’s plan is approved, the U.S. AAA rating might not necessarily go down. I want you to explain why — what that means.”

BURNETT: Yes, it is interesting, and I’m glad I have the chance to do so.

So I spoke to an investor who — a very influential investor who had a chance to sit down with S&P. And what he was saying was, the reason for S&P — and as you’re suggesting this — and it’s unclear what they would actually do — but suggesting to him that they felt this way, was really about the size of the plan, not what is in them. I think it is important to emphasize that most people think that both of the plans are really Band-Aids and don’t deal in any significant way with the spending and cost issues in the country.

And as we had indicated, Wolf, some investors — and this is a very subjective view among investors of what would happen with interest rates
— think you could see an increase of rates of a quarter of a percent to half a percent. And if you look at California, Wolf, I don’t know if you remember, a year, year and a half ago, when California had to issue all those IOUs. If that’s what happens to the federal government, California’s rates have gone up half a percent to a percent. That is a big increase, and that happened even when they stopped paying IOUs and were able to pay cash again. So the long-term implications stay with you even if the default or the downgrade is very short.

BLITZER: Yes, and that translates into real money when all is said and done, even a small interest rate increase.