Former Amb. To Israel On MSNBC: ‘US Will Have To Get Involved’ In Syria, ‘Can’t Be Left Just To Others’ 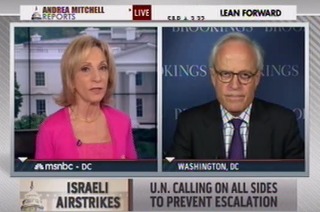 President Bill Clinton’s former Ambassador to Israel, Martin Indyk, told MSNBC host Andrea Mitchell that the United States is obliged to intervene in Syria in the coming weeks. He said that the complicated task of removing Syrian President Bashar al-Assad from office and ensuring a transition to a successor government “can’t be left just to others.”

In a discussion of the weekend’s events, in which Israeli warplanes are alleged to have carried out strikes in Syria, Mitchell said that “I have never seen a closer connection post-strike than in this instance between the US and Israel.”

Indyk replied that this is not the first time in which President Barack Obama has affirmed Israel’s right to self-defense. He added that America and Israel have a number of common interests in Syria, including ensuring chemical arms do not find their way into the hands of Iranian-backed Hezbollah agents and that Assad is removed from power.

“In some ways, Israel is serving the American interest,” Indyk said. “Better, I think, from the White House’s point of view, that Israel do it than the United States do it. At least, at this stage.”

Indyk said that Obama’s administration has every reason to be “supportive” and “grateful” to Israel for carrying out strikes in Syria. However, he made it clear that the US cannot remain on the sidelines of the Syrian civil war in perpetuity.

“Eventually, the United States will have to get involved, and I think the president is coming to that understanding, if the reports can be believed, that sooner rather than later the United States is going to have to intervene in the ways that I’ve suggested.” Indyk had recommended earlier in the segment to establish a no-fly zone in portions of the Syrian state.

“It can’t be left just to others,” Indyk cautioned. “Because, without US leadership, it’s not going to be possible to handle this very complicated process of removing Assad from power and ensuring an orderly transition.”