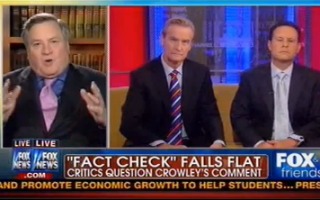 On the morning after the second presidential debate, Fox & Friends invited former Clinton adviser and Fox News contributor Dick Morris onto the show to discuss his take on debate moderator Candy Crowley‘s fact-checking of Romney over the President’s use of the word “terrorism” to describe the attack in Benghazi.

“What did you think of Candy Crowley essentially siding with the President?” host Steve Doocy asked Morris.

“On Libya,” said Morris, “I think that everybody knows, clearly, that Barack Obama tried to blame this on a movie. He said in the speech to the General Assembly, he said it constantly over a two week period. He and Hillary filmed a commercial that the State Department ran in Pakistan apologizing for the movie. We all know that. And whether he used the terror word or “t word” in the Rose Garden the day after or not is totally irrelevant. We all know that that’s what Obama did. So, we all know he doesn’t like to drill for oil, we all know that he believes in more spending and borrowing, well all now that he tried to blame this on a movie. So don’t predicate your whole campaign on something that a 10-year-old knows isn’t true.”

“Can you say ‘droned’?” Doocy later asked as the segment wrapped up.