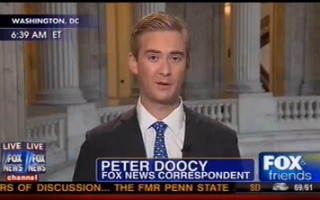 On Friday, the Fox & Friends crew explored Minority Leader Nancy Pelosi‘s recent remark that she “could have arrested Karl Rove on any given day… I’m not kidding.”

Reporter Steve Doocy noted that — while Pelosi had actually been joking — they were curious about whether any sort of jail cell actually does exist in the House or Senate. What he found might haunt you forevermore. Or not.

RELATED: Pelosi Slams Contempt Hearings: ‘I Could Have Arrested Karl Rove On Any Given Day’

“Beneath the capitol, about half way between the House and the Senate,” Doocy explained, “there is a dark tunnel that leads to a small room with steel bars and a padlock on the outside. You’re looking at what it looks like with the gate open. But this just looks like a prison. It’s not actually a prison. It’s really the room that was originally designed to be President George Washington’s tomb but when the plan to lay him to arrest there was scrapped, he ended up at Mount Vernon.”

That said, “Minority Leader Pelosi was right in that Congress does have the right to power — rather, they do have the power to arrest and jail anybody that they charge with contempt of congress but they usually just send cases like that over to the justice department and according to the Senate historian Don Richie, they haven’t detained anyone since the 1930’s.”

Have a look — and get a free history lesson, to boot — via Fox News: