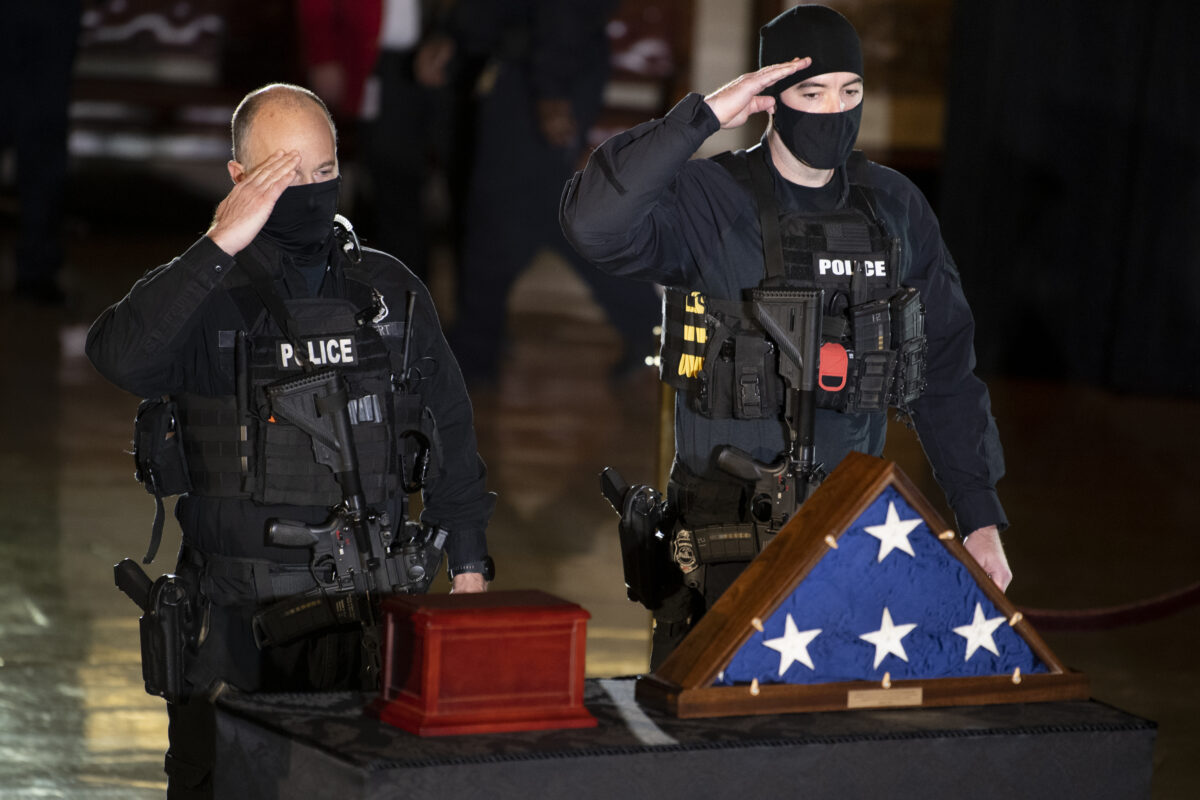 Sicknick died of head injuries sustained on January 6 while he defended the Capitol from pro-Trump insurrectionists who stormed the building in a violent attempt to overturn the 2020 election.

His remains arrived at the Capitol at approximately 9:30 p.m. on Tuesday night, and President Joe Biden joined Congressional lawmakers and law enforcement officials in paying their respects to Sicknick.

A search for Sicknick on the broadcast monitoring service TVEyes shows that the network has only uttered his name 10 times, as of this writing and since his ceremony began. While the somber ceremony was unfolding, Fox News prime time hosts Sean Hannity and Laura Ingraham were discussing a LeBron James incident, the media, Dr. Anthony Fauci, and their standard helping of media criticism.

Hannity and Ingraham did address the Sicknick ceremony in the toss between their shows, and Ingraham aired the Biden family during their arrival at the rotunda. The network was called out, though, for the editorial decision to not air the ceremony.

In the hour that followed, Shannon Bream offered a thoughtful lamentation, saying “Former Capitol Police Officer Brian Sicknick is lying in honor in the Capitol rotunda tonight. Underneath the dome, he lost his life defending on January 6th. D.C. police and the FBI have released few details about the ongoing investigation into Sicknick’s death from injuries sustained at the Capitol during the riots. Officer Sicknick was 42 years old, always dreamed, we’re told, of becoming a police officer. He was in the New Jersey National Guard as well. He was what we would all call a hero.”

But by this time, the Blue-checked Twitter set had already started calling the normally pro-Police network out:

CNN and MSNBC are covering live the ceremony in honor of police officer #Sicknick for last hour. Fox is not. Striking contrast.

Fox News didn’t cover the memorial of Officer Sicknick—the Capitol police officer beaten to death Jan 6 by a mob of fascist insurrectionists who attacked the Capitol building. Fox News doesn’t care about cops. They only care about their own wild-eyed conspiracist narrative.

I wonder why “pro-police” Fox News almost completely ignored Officer Sicknick’s memorial service at the Capitol. Might it have *something* to do with the fact that they repeated Trump’s Big Lie that inspired the insurrection nearly 800 TIMES and are complicit in his death?

I guess blue lives don’t matter much to them after all. #ShameOnFox

MSNBC and CNN are covering the Capitol Rotunda where Brian Sicknick lies in honor.

On Fox News, Laura Ingraham is bitching about Dr. Fauci.

Laura Ingraham finally dips in to provide Fox News’ first coverage of Officer Snicknick lying in honor at the Capitol Rotunda, airing about 20 seconds of the president and first lady paying their respects. pic.twitter.com/23KNuM8e8r